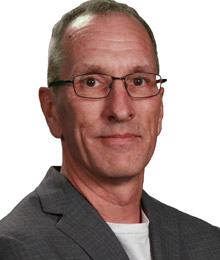 A self-professed news and political junkie, David is combining his other passion in life – technology – as the Senior Web Producer for Saskatoon.

He first joined Global Ontario (now Toronto) in 1988, doing everything from running cable and getting coffee to operating cameras for the newscasts.

David headed west in 1990 and left the industry for a brief period of time before the lure of television beckoned again.

In 2000, he joined Global Regina before heading to Saskatoon in December of that year to become the audio operator at the station.

That role expanded when he joined the rotation to direct news on weekends, eventually turning into a permanent producing/directing assignment when the Evening News expanded to weekends.

When the opportunity arose to become the station’s first web producer in 2010, David jumped at the chance.

Whether it is the latest breaking news or a human interest piece, David brings passion to each and every story.

When not at work, David likes to spend time with his partner Shirley and his two children, along with Shirley’s children and grandchildren. He still has a passion for his hometown Montreal Canadiens and bleeds green and white for the Riders.