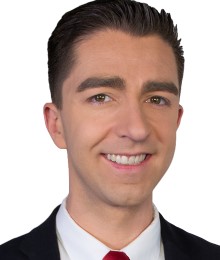 After taking an exciting ‘Violent Weather’ class at the University of Alberta, he quickly switched gears out of pre-medicine, graduating from the Atmospheric Science B.Sc. degree program.

After completing internships in Edmonton and Lloydminster, Peter was hired at Newcap Television as a cameraman, but his role quickly expanded to include reporting, anchoring news, and eventually weather.

In September 2012, Peter became a CMOS endorsed weathercaster, awarded by the Canadian Meteorological and Oceanographic Society.

In November 2012, Peter started at Global News and continues to enjoy the challenges of forecasting weather on prairies, particularly summer severe weather.

Other career highlights include working at Environment Canada, preparing a report for the City of Edmonton that examined the impact of climate change on the city and conducting research to study the impact of Greenland’s melting glaciers on ocean and atmospheric circulation patterns.

In his spare time, Peter enjoys relaxing, spending time with friends and singing in the choir at his church. He is also currently working towards his masters of divinity at Ambrose University.