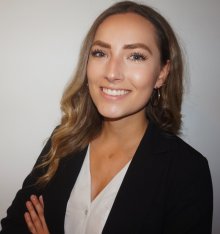 Katherine is currently a producer for Global National, the network’s flagship newscast. She started her career with Global News in 2017 as an editorial assistant and has since taken on many roles in the newsroom, including working as a broadcast and web writer, an assignment desk coordinator and a field producer. She joined the national team in 2020 as an associate producer.

Born in Calgary, Katherine moved to Toronto where she earned her diploma in broadcast and print journalism at Humber College. After graduating, Katherine pursued her B.A. in media studies from Guelph-Humber University where she also obtained a diploma in communications.

Katherine has helped the network cover a range of topics – from politics and health, to sports and crime. When she is not working in the newsroom, she enjoys travelling, going to concerts and delving into a good book.