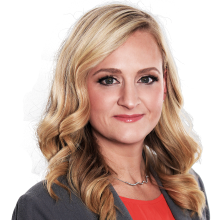 Maegen Kulchar is a Videographer for CKWS News Kingston. Maegen grew up amongst the vineyards in beautiful Niagara-On-The-Lake. She holds a degree in Film Studies from Carleton University and a diploma in Broadcast Journalism from Niagara College.

While in Niagara, Maegen built her experience through volunteering with Cogeco in Niagara Falls. Her Niagara favourites include an interview with Olympian songwriter Alan Frew, Canadian TV Host Rick Mercer and participating in WNED’s documentary Our Town: Niagara-On-The-Lake.

After college, she spent 6 months as a Canadian intern at Fox 35 News in Orlando, Florida. There she was able to tone her skills as well as learn new ones. She says it was the best experience of her life and still maintains many friendships and contacts.

From one wine country to another, she is happy to make Kingston her home and join the CKWS News Team. She enjoys baking and brings in sugary treats for the crew on a regular basis. As a past CIS competitive swimmer she also enjoys staying active — and in her spare time, you can catch her swimming laps at a local pool.