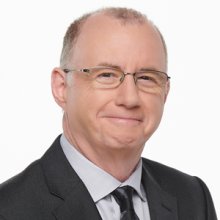 Gord started in radio news while attending university, with summer jobs at CKDA in Victoria, B.C. and CJOY in Guelph, Ontario. After graduating from the University of Windsor in 1979 with a double major in political science and economics, Gord went to work at CKLQ in Brandon, Manitoba and then on to CJAT in Trail, B.C. where he spent five years as News and Sports Director.

He then spent three years teaching broadcast journalism at the B.C. Institute of Technology in Burnaby, the latter two as Program Head.  In 1989 he began working in the CKNW newsroom, and in 1991 took over as News Director from the legendary Warren Barker. Gord now is the morning news anchor, handling newscasts from 4 a.m. through noon every weekday.