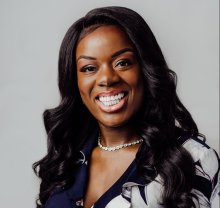 After working for the University of Waterloo as a Graduate Coordinator and Advisor to Masters and PHD Students in the English department Megan made a return to the small screen.

She has worked the red carpet at high profile award shows such as the Much Music Video Awards, TIFF and the Latin Billboard Awards.

Megan graduated from Broadcast Television at Conestoga College and worked as an anchor with Rogers TV Mississauga and Brampton. At the same time she was a segment host for Rogers TV Kitchener’s The Home Team, and sports casted for the Toronto Raptors at the Air Canada Centre.

Megan has sat down for interviews with the late Rob Ford, Superstar rapper Drake, and Latin recording artist J. Balvin.

Recently Megan was an entertainment reporter for Cogeco Your TV Burlington covering events, festivals and fundraisers in Halton Region.

Raised by a Jamaican mother and a Ghanaian father Megan is the youngest of four, she was born and raised in Kitchener-Waterloo Ontario.