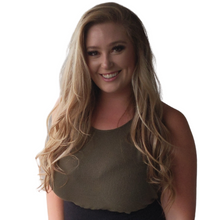 Jessika Guse is an award-winning multi-media journalist who thrives on capturing impactful stories. Guse describes herself as one of the lucky ones, as she was able to find her passion for storytelling early on, having been able to take journalism classes throughout high school at Dr. E.P. Scarlett.

Her roots are in Saskatchewan; however, Guse has called Alberta home for most of her life – though don’t worry, she still cheers for the Roughriders. After becoming a proud graduate of the Broadcast Journalism program at Lethbridge College, she’s worked in all three Prairie provinces.

Between 2017 and 2018, she was a member of the CJME/CKOM news team that won four Radio Television Digital News Association (RTDNA) awards.

A self-proclaimed Jill of all trades, Guse enjoys all aspects of being in the newsroom. Whether she’s writing breaking news stories for online, delivering the day’s top stories, photography or videography – she loves it all.

In her spare time she can be found at the dog park with her rescue dog Ryder, trying to beat her mom and granny at Scrabble, thrift shopping, or trying her absolute best in golf and snowboarding.