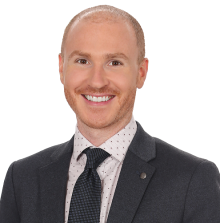 He was originally hired to fill a six-month paternity leave as a cameraman, but as that job came to end, he joined the online team as a Digital Broadcast Journalist in a permanent role.

Jonathan also fills in as a television reporter, a role that tests all of his skills — shooting, writing, and editing.

He got his start in print at Westwind Weekly in Magrath, Atla. before switching gears to radio at Sunny 94 FM in Lacombe. Jonathan graduated from Lethbridge College with a Digital Communications and Media diploma in 2016.

When he isn’t behind the desk, Jonathan can be found behind the camera at the Regina Pats’ games or in front of a television watching his beloved Montreal Canadiens.

01:42
Global News at 10 Regina
Saskatchewan families making the best of the holidays

03:35
Global News Morning Regina
What the Deck: First steps to building a deck

Saskatchewan RCMP says one person is dead following a rollover that took place on Highway 942 near Big River at about 1:30 a.m. Saturday.

RCMP are asking for the public’s assistance in finding the owner of an urn containing ashes — it was found behind a business on the Highway 16 bypass in North Battleford.

With COVID-19 restrictions lifted this summer throughout Saskatchewan, public health officials say it is safe for schools to resume traditional in-class learning this fall.

The province said there are 26 new cases of COVID-19 to report in Saskatchewan on Thursday, bringing the provincial total to 49,556 cases.

The first 5,000 people to get vaccinated at one of the new designated pop-up clinics will receive a complimentary ticket to Queen City Ex.

The Green and White game on Saturday holds a little more weight this year with no preseason games scheduled this season in the CFL.

In June, police across Saskatchewan wrote a total of 490 tickets for people not using or wearing seatbelts or small passengers who were not properly restrained.

Saskatchewan Roughriders wide receiver Ricardo Louis is ready to prove himself north of the border after injuries forced him out of the NFL.

Tamra Jewel Keepness was five years old when she was last seen in her home in Regina. She went missing on July 5, 2004.

Due to recent rainfall and cooler weather, the Saskatchewan Public Safety Agency (SPSA) is lifting the provincial fire ban that has been in place since July 2.

A recent death investigation by the Regina Police Service is now being regarded as the city’s eighth homicide of 2021.

A vehicle-pedestrian collision on Tuesday, investigated by the Regina Police Service, ended with minor injuries for the pedestrian and no charges against the driver.

The province said there are 18 new cases of COVID-19 to report in Saskatchewan on Wednesday, bringing the provincial total to 49,322 cases.

Many employees have questions about what their contract really says or how much severance they’re owed. Here’s when… twitter.com/i/web/status/1…

As rumblings of a possible federal election continue across the country, a new poll has found that, for the first t… twitter.com/i/web/status/1…

“It’s a once-in-a-lifetime experience. We have been waiting for this for a long time,” said the proud mom. trib.al/DQpE2Or