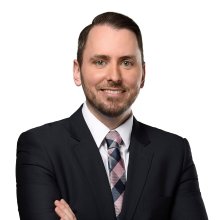 Dave Squires is dedicated and passionate reporter, host and producer who has been part of the Global Halifax team since 2015.

Dave holds post a post graduate degree in Journalism from Sheridan College in Oakville, Ontario. He also holds a Bachelor of Arts degree from Memorial University of Newfoundland and Labrador.

In 2015, Dave decided to make the move to Halifax to start a new chapter in his career. Dave is currently working as part of the Global Halifax Morning News team as the go to live reporter. He also fills in on hosting and producing duties.

When not at work, he loves to travel as much as possible, enjoys baking and playing tennis.

Dave grew up in St. John’s, Newfoundland and Labrador.

01:37
Global News at 6 Halifax
Hope for Wildlife helps record number of animals in 2018

01:49
Global News at 6 Halifax
Halifax legacy rooms to offer a step toward reconciliation

01:43
Global News at 6 Halifax
Proud Boys: A look at the group who protested an Indigenous ceremony in Halifax

Halifax Regional Police responded to reports of gun shots in the area of Barrington Street and Richmond Street just before 6 p.m.

Officers were called to the area of Windmill road and Parkstone Road around 10:30 p.m. after reports of gunshots.

Halifax Regional Police responded to reports of gun shots in the area of Connaught Avenue and Windsor Street just after 10 p.m.

Halifax Regional Police say they responded to a weapons complaint in the 600 Block of Washmill Lake Drive around 8:50 p.m.

RCMP says a 20-year-old man suffered life-threatening injuries as a result of the shooting.

Just after 10 p.m. police responded to a report of an injured man bleeding from the head running in the area of Jackson Road

Officers were called to Gaston Road after several witnesses heard what was thought to be shots fired in the area.

Police say 12 to 15 people were gathered on a small dock and were in violation of new public health restrictions that came into effect in November.

The fire broke out just after midnight on Brussels Street.

Police say just before 8 p.m. on Monday evening a caller reported a man placing a long gun in his pants and entering the Shoppers Drug Mart on Spring Garden Road.

No one in custody after Dartmouth homicide: Halifax police

Police were called to Primrose Street around 6:30 p.m. on Thursday for a weapons complaint that involved an injured man. When they arrived, they found the man had life-threatening injuries.

Halifax Regional Police say the car was travelling eastbound on Leiblin Drive when it left the road.

Police were called to the Hampton Inn and Suites on Cromarty Drive around 12:35 a.m to reports of a shooting. When they arrived they located a 20-year-old male with a gunshot wound to his back.

Crime
June 15, 2020 3:31 am
Man charged after threatening to burn down Halifax Police HQ

Halifax police say the man showed up at the building around 6 p.m. and made threatening comments to an employee. He then threatened to burn down the building.

#BREAKING: The demonstration has ended after about 5 hours. globalnews.ca/news/7971666/n…

WATCH: Part of the province’s plan to accelerate COVID-19 vaccination is the opening of a new clinic at the Halifax… twitter.com/i/web/status/1…

Watch the top stories on Global News at 6 Halifax with @SarahRitchieTV globalnews.ca/video/7971957/…