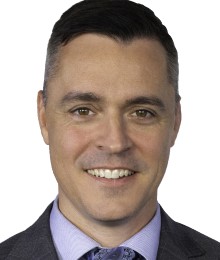 Chris joined the Global News Morning team as a weather specialist in June 2019.

His broadcasting career in radio and television has taken him through windy Alberta, the sunny Okanagan, the snowy West Kootenay region, and the frigid Peace Region in northeastern B.C.

Chris is a well-known journalist in Saskatoon, having spent the previous seven years as an anchor and reporter at News Talk 650 CKOM.

When Chris is not talking about the weather, he’s usually out snapping photos of it. His collection is filled with colorful sunsets, sunrises, and frost covered trees lining the South Saskatchewan River bank, but he has yet to capture that illusive shot of a tornado on the Prairies.

As a long-suffering fan of both the Toronto Maple Leafs and the Toronto Blue Jays, Chris can often be heard uttering the words, “next season, it’ll be our year.”

Chris lives in Saskatoon with his wife Megan, and twin boys, Benjamin and Owen.