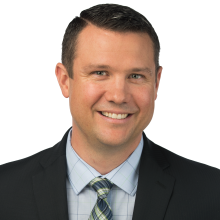 Soon after, he decided to pursue his passion of news, and enrolled in the Broadcasting Diploma program at Mount Royal College. Upon graduating in 2007, Liam joined the Chat News team in Medicine Hat, where he spent seven years working his way up the ladder to the position of Anchor/Assistant News Director.

His Chat career highlight was anchoring the award-winning coverage of the June 2013 flood, and flood preparations in June 2014.  Both newscasts were awarded the RTDNA Canada Bert Cannings award for the Best Small Market Newscast in Canada.

Liam moved his family (including his weeks-old twins) to join the Global Lethbridge team as Anchor/Newsroom Manager in September of 2014.

The following year, the team was awarded the Bert Cannings award for the Best Small Market Newscast (Prairie Region) for its coverage of the Blairmore Amber Alert in September of 2015.

Liam enjoys volunteering his time and efforts to local causes and fundraisers, including emceeing charity events and being the worst golfer at every charity tournament he enters.

When not in the newsroom, he can usually be found adventuring with his wife Jessica and their young twins.