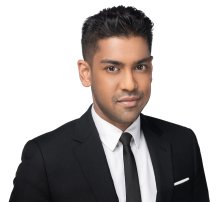 Travis Dhanraj is the Queen’s Park Bureau Chief for Global News, leading the network’s coverage of Ontario provincial politics. Dhanraj is a familiar face to viewers in the GTA and to politicians at Queen’s Park having previously spent nearly a decade as a reporter and anchor with CP24 and CBC News in Toronto.

Beginning his career in broadcast journalism in 2005 as part of the team that brought Entertainment Tonight to Canada, Dhanraj has shown marked versatility throughout his career, having spent significant time reporting on entertainment, politics and breaking news. Dhanraj has reported on key local and national events including the November 2016 U.S. election, the Republican National Convention in July 2016, the Jian Ghomeshi trial and Canada’s 2015 Federal Election; while he delivered the first interviews both with then-Mayor Rob Ford after his cancer diagnosis in 2014, and with Ford’s mother Diane after his death in March 2016.

Dhanraj has also reported from around the globe, covering the 2011 Tsunami in Japan while working as a producer for CBS News and even travelling to Africa with legendary musician Tom Cochrane to produce a feature about the humanitarian efforts of Canadians overseas during his time as an entertainment reporter.

Born and raised in Calgary, Dhanraj is a graduate of Ryerson University’s Radio & Television Arts Program. In 2000, Dhanraj was presented with Calgary’s prestigious ‘Leader of Tomorrow Award’ for his work on the issue of child poverty in his hometown. Dhanraj now lives in Toronto where his interests include hockey, weightlifting, travel, and the outdoors.

01:53
Business
Coronavirus: Ontario needs to decide whether ‘modified Stage 2’ measures will be extended or not

@michaeljacole @Twitter @mackaytaggart you don't know the half of it!

“Minister MacLeod thanks the OPP, the Ottawa police, and the broader public for their concern over her safety and security.” Continue reading →

“Where I teach, my classroom is in a wing of a school that was built in the 60s. It’s recycled air. I have great big windows but they don’t open, some of the people in my section don’t even have windows at all and I’ve had respiratory issues.” Continue reading →

“We’ve taken great strides in terms of new protocols in safety for our customers and for our employees. The experience is a little different, but it is still a great experience to come down here and taste world-class wines.” Continue reading →

Toronto and Peel Region will be moving to the next stage of reopening on Wednesday. Continue reading →

3 reopening plans for Ontario schools being considered, some online learning expected to continue

“We are taking every precaution, investing more, and listening to the best medical advice in the country to keep students, staff, and families safe,” Education Minister Stephen Lecce said. Continue reading →

Sources with knowledge of the trip said Premier Doug Ford had to “check on the plumbing” at his summer residence, which is currently under renovation. Continue reading →

At Western University, researchers are looking at how the virus gets into a person’s cells. Continue reading →

The members include three operators, a mechanic apprentice, a maintenance employee and a subway fare collector. Continue reading →

Doris Grinspun, Chief Executive officer of the Registered Nurses’ Association of Ontario, confirmed to Global News that several of her members have contracted COVID-19 and she said it is due to a lack of PPE. Continue reading →

“When we look at how many members we have that are in self-isolation right now, we have well over 500 and that is causing some stress as well because that’s taking officers off the street.” Continue reading →

A psychiatrist says the man who killed 10 pedestrians in Toronto’s van attack said he’d consider carrying it out ag… twitter.com/i/web/status/1…

RT @globalnews: Canada is using a variety of treatments for COVID-19 patients. Global News explains which treatments Canadian patients can…