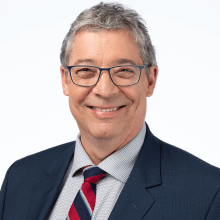 In a career that has taken him across the country, Doug Vaessen is happy to be back in Alberta.  With extensive experience as a reporter, anchor and producer in both news and sports he has enjoyed a full career that began in Medicine Hat before taking him to Saint John, Halifax and now to Calgary.

His career highlights include meeting and interviewing hockey great Jean Beliveau and an exclusive interview with Brian Mulroney while he was Prime Minister.  Doug also won a Can-Pro for a documentary.

When not on the prowl for a news story,  you can catch Doug furiously trying to keep up the pace set by his two young children, Anna and Leo, often on Calgary’s beautiful pathways. The Vaessen family loves to visit  Grandma and Grandpa’s house in Saskatchewan, where they have cats and horses.