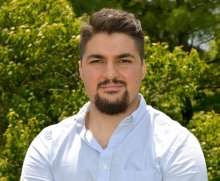 Aaron D’Andrea is a national online journalist with Global News based in Toronto, Ont., who specializes in breaking news.

Before joining Global, he was a reporter for Metroland Media Toronto. While there, he broke several stories and covered major news events like the 2018 Toronto Van Attack. During his time at Metroland, he won two Ontario Community Newspapers Association awards.

D’Andrea’s career began in the television industry before becoming a journalist. He holds an honours advanced diploma in journalism from Humber College in Toronto.