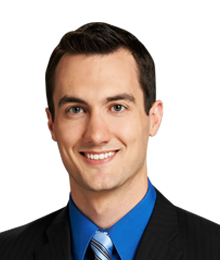 “There’s nothing better than waking up before the crack of dawn and being the first person at the rink on Saturday mornings.” Although Mitch is an all-around sports fanatic, he has a soft spot for amateur sports, having played in countless broomball tournaments in tiny arenas around the province. Mitch grew up in the small Manitoba dairy community of St. Claude. After high school, he moved to Brandon, where he graduated from Assiniboine Community College in Media Production. Following a brief stint in Prince Albert, Sask., Mitch returned to Brandon to take on a position at CKX as a camera operator/editor and eventually nabbed his dream sports job just a short nine months later. Unfortunately when October 2009 rolled around, CKX closed its doors for good. Mitch quickly rebounded and was hired at Global Winnipeg as a sports reporter/anchor – three years after completing a high school job shadowing program in the same department. Mitch can be found during his spare time strapping on the skates during the winter months, or hitting the diamond or volleyball pits during summer evenings.