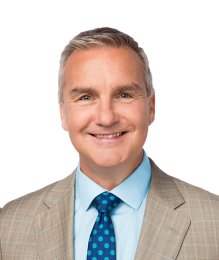 Kevin Karius has all of the day’s sports action in Edmonton’s most complete sports report, weeknights at 6.00 on the News Hour and at 11.00 during News Hour Final.

Kevin joined ITV (now Global Edmonton) back in 1997. His broadcasting career started eight years earlier in Yorkton, Saskatchewan. In between, he has worked at television stations in Prince Albert, Lethbridge, Saskatoon and Calgary.

Since 2003, Kevin has also worked for the Oilers Radio Network, providing colour commentary for dozens of Edmonton Oilers games. He also joined the Oilers Pay Per View television broadcast team during the 2005-2006 season, serving as host, colour commentator, and play-by-play announcer.

The energetic and colourful sportscaster is the honourary chair for the Easter Seals of Northern Alberta. Every August, he hits the links to host the “Kevin Karius Celebrity Golf Classic.” Proceeds from the annual golf tournament go to the Easter Seals. In 2008, $90,000 was raised.

Kevin is from Crooked Lake, Saskatchewan. He enjoys golf, rec hockey, fishing, cycling, running and getting back to the lake as often as possible to water ski and visit family and friends.

WATCH: Kevin Karius answers a few questions for Global Edmonton viewers, including: what are you most passionate about and what item would you bring on a deserted island?

01:14
Sports
Accessible Volt Hockey for children with disabilities in Alberta

01:36
Global News Hour at 6 Edmonton
EE Football Team looking to the public for its new name

01:28
Global News Hour at 6 Edmonton
Who are your all-time Edmonton Oilers all stars?

03:14
Global News Hour at 6 Edmonton
Sports charities slugging it out through pandemic

Former NHL player Brantt Myhres pens memoir about path to sobriety: ‘I spilled my guts out’

Former NHL player Brantt Myhres says the birth of his daughter saved his life from drugs and alcohol. Myhres wrote about his addiction and recovery in his new book “Pain Killer.” Continue reading →

Edmonton’s Shannon Szabados isn’t turning the page on her hockey career just yet — but the Olympic gold medalist is writing another chapter. Continue reading →

Mackenzie Tour ready to tee off in 2021

COVID-19 cancelled all events on the Mackenzie Tour, so the ATB Financial Classic in Calgary will be pushed back to 2021 and Edmonton will host the event in 2022. Continue reading →

Restoring vintage golf cars a passion project for Alberta man: ‘The grand total now is around 84’

If you like golf history, take the time to drive out to the Legends Golf and Country Club, just northeast of Edmonton. Continue reading →

Saturday marks the 40th anniversary of what’s been dubbed in the hockey world as the “Miracle on Ice.” Continue reading →

When the MacEwan University Griffins host the Augustana Vikings on Saturday, the team will honour a former player who passed away last year by retiring his jersey number. Continue reading →

Global News ALL IN: Fans share their Eskimos game-day experience

Global Edmonton, with the help of the Edmonton Eskimos and their fans, is producing another documentary on the game-day experience at an upcoming Eskimos game at Commonwealth Stadium. Continue reading →

You could say the Edmonton Oilers’ Mikko Koskinen is the goaltender of Christmas past, present and possibly the future. Continue reading →

Alberta man comes up with solution for stinky hockey equipment

A Sherwood Park man believes he has the answer to the rank smell of hockey equipment. Continue reading →

In his freshman season with the Oklahoma State University Cowboys, Chuba Hubbard has made quite the impression. Continue reading →

Another eight players were cut at the Edmonton Oilers’ training camp on Thursday but prospect Cooper Marody wasn’t one of them — in fact, he picked up his first point of the pre-season in a tilt against the Winnipeg Jets that night. Continue reading →

“We’ve been at it for over a year now, and we are really at our boiling point,” said one clinical social worker. trib.al/81LE49O

“Look, I don’t want to get fired but obviously it’s an open and shut case ... That being said, he’s a white cop in… twitter.com/i/web/status/1…

For Genius Hour, students spend one hour per week on a passion project of their choice to advance their learning or… twitter.com/i/web/status/1…