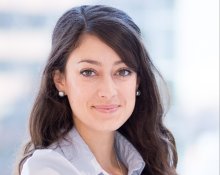 Elizabeth McSheffrey is an award-winning journalist from Ottawa and an online reporter for Global BC.

She joined the network in 2018 as a television reporter in Halifax after working as an investigative journalist for the National Observer, and a media trainer for Journalists for Human Rights.

Elizabeth is a graduate of Carleton University’s journalism program. Over nine years, she has reported from all over Canada, and in seven countries in Central America and Africa.

When she’s not filing access to information requests, she enjoys volleyball, finding new ways to cook with the same five ingredients, and listening to musical theatre on repeat.