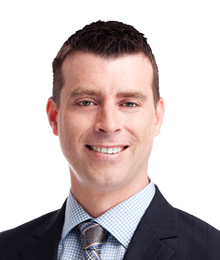 Russ Hobson grew up in Stratford, Ontario. After completing high school, he moved to Belleville where he graduated from Loyalist College in Broadcast Journalism.

He first plied his trade in Syracuse, New York, learning the ropes at WSTM-TV. When his practicum was complete, he was hired on at a local television station in Prince Albert, Saskatchewan. After three grueling years of getting used to the Prairie winters, Russ was hired on at Global Winnipeg in 1998.

Growing up in a sports family, Hobson had no choice but to follow in his father’s footsteps, and cheer for the Detroit Red Wings and Atlanta Braves. He spent many hours in the car with his father, driving to the next ballpark or arena.

Hockey is his sport of choice, but he’s a self-professed “Sports Junkie”, and an avid member of any sports pool he can get into.

In his spare time, Hobson coaches Timbits Hockey, a community program for children, and spends quality time with his wife, and three children – Kenny, Jessica and Jack.