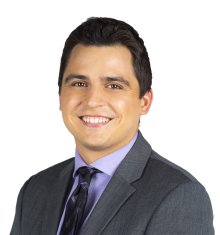 Born and raised in Winnipeg, Kevin quickly realized his childhood dream of becoming a professional hockey player was out of the question. Instead, he turned his focus to the world of broadcasting and journalism.

After graduating from the Creative Communications Program at Red River College, he began his career in print with stints at the Winnipeg Sun and Portage Daily Graphic.

Then, it was off to the world of television as Kevin joined Shaw TV Winnipeg. He served in a number of roles, from reporter to camera operator/editor, to producer and host on live mobile broadcasts.

Kevin landed an opportunity with Global Winnipeg in October 2017 as reporter for Global News Morning. He has since moved into the anchor chair on Global News at 10.

He is an avid fan of rock music and can usually be seen playing guitar or air-drumming to his favourite tune. After years of frustrating results, he still finds himself playing 18 holes of golf whenever he can.