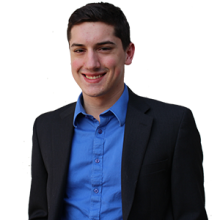 Austin is a born Winnipegger with a thriving passion for news, sports and music.

In 2016, Austin began his broadcasting career at Global News Radio 680 CJOB, assisting Bob Irving with Winnipeg Blue Bombers training camp. From there, Austin worked behind the glass, producing evening content. Then, he began his role as an evening news anchor. Over time, Austin expanded his role to include covering Winnipeg Jets games, being a part of the Hal Anderson Weekends team, and co-hosting Sports Sunday.

In April 2018, Austin made the move to Global News Winnipeg to become a Digital Broadcast Journalist.

When Austin is not busy in the newsroom, he can be found coaching hockey at his former high school, J.H. Bruns Collegiate, spending time at Victoria Beach, or enjoying the many sporting events year round in the city.