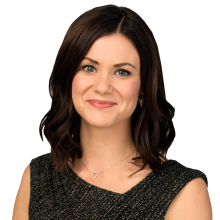 Sarah Offin started her passion for storytelling young, working for a local newspaper and radio station in her hometown of Mackenzie, B.C.

She was brought to Calgary in 2004, drawn by her love of speed skating, to study at U of C, and skate at the neighbouring Olympic Oval. She finished part of her Communications Studies degree studying in Leicester, England, before returning to Calgary and earning her Broadcasting diploma at SAIT Polytechnic.

Career highlights include the 2011 Slave Lake wildfire, 2016 Fort McMurray wildfire, and the 2013 Calgary flood. Her work on a 2013 series about Alberta’s wild horses with cameraman George Glenn earned them the Stan Clinton Award for News Essay Cinematography.

You’ll find Sarah chasing wildlife and exploring Alberta’s great outdoors, both in her work and in her spare time.