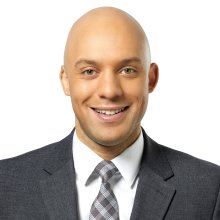 Senick studied journalism at Boston University, where he found his passion for hard news. He started his journalism career with Global News, taking his first job in his hometown at Global Saskatoon, where he worked as a reporter and anchor for more than four years before heading west.

Since joining the Global Calgary family, Senick has brought his strong journalism skill set to dozens of stories, most notably the month-long 2019 Alberta election campaign, where he reported from UCP headquarters on election night and hosted a series of panel interviews on Global News Morning Weekend.

Senick also made waves with several stories and live reporting from Global Calgary’s award-winning coverage of the Kenow wildfire in Waterton Lakes National Park, and his extensive coverage of Calgary Votes 2026 – the city’s plebiscite vote on whether to host another Olympic Games.

When Senick isn’t sitting on the anchor desk or reporting on the issues that matter to Calgarians, he’s an active member of his community, particularly in youth sports. Senick, who’s been an advocate for youth sports and a coach for seven years, currently coaches of the junior development group of athletes at CalTaf Athletics in Calgary.