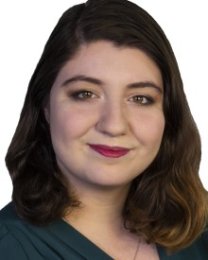 For a girl from the city, Gabriela Panza-Beltrandi’s career has brought her to some of the coldest parts of Canada.

Gabriela grew up in Toronto, where she graduated from Ryerson University’s journalism program in 2016. During university, she interned in newsrooms across Western Canada, including a brief stint at Global Regina.

Promised adventure and a great view of the Northern Lights, Gabriela packed her bags and headed to Yellowknife, N.W.T., to work as a reporter and anchor for Moose FM in 2016.

In 2017 she joined the CBC as a reporter and newsreader. For three years she reported on the goings-on in Yellowknife and travelled to communities across the sub-Arctic to tell their stories, before making the move to Global News in slightly-warmer Saskatoon in 2020.

When she’s not in front of a camera, Gabriela loves being behind it, making short-films in her spare time. She also enjoys watching scary movies, biking, baking and finding interesting places to travel. Her favourite destination: Uruguay, South America.

01:53
Global News at 10 Regina
Charities, organizations think ‘outside the box’ for fundraising during COVID-19

01:47
Global News at 10 Regina
While many excited for reopening in Saskatchewan, mental health advocate warns not everyone ready

02:00
Global News at 10 Regina
Rainy Victoria Day in Saskatchewan welcomed by many

Saskatoon Pride said support has been pouring in online and from the community, even with a mostly virtual festival this year.

Indigenous and non-Indigenous people walked together to show their solidarity and to push for Canada to follow the actions outlined in the Truth and Reconciliation Commission.

Saskatoon police arrested a man on Broadway Avenue after a Pride event was disrupted Wednesday evening.

Saskatchewan’s auditor is calling on the province to better track data around programs meant to reduce the number of people on remand in the province.

Memorial being held in Saskatoon for victims of deadly attack on Muslim family in London, Ont.

A prayer meeting for the victims of the deadly attack in London, Ont., will be at 7:15 p.m. Tuesday at the Islamic Association of Saskatchewan’s Islamic Centre.

Jan Shadick said she wants to see the city ban using poison corn to kill pigeons, or at least require the area it’s scattered around to be labelled, like when spraying pesticides.

Myrna LaPlante said she’s noticed a change in how police, and the public, react to missing Indigenous women and girls compared to her aunt’s disappearance in 2007.

Regina police are investigating after a scammer posed as a pizza delivery driver and stole a woman’s bank information, and there could be more victims.

While many are anxious for things to return to normal amid Step 1 of Saskatchewan’s reopening plan, mental health experts warn some may not be ready.

The family travelled to Minnesota for treatment, something they said they feel was their best option, even though they had yet to be approved for medical coverage.

The officers started patrolling downtown last week. They’re similar to conservation officers, in that they wield some power, but aren’t armed police.

Many across Saskatchewan woke Friday morning to a frigid morning as a cold snap hit the province.

Tribal Chief Mark Arcand said they will be administering up to 600 doses of the Pfizer vaccine a day between May 25 and 28; double its usual daily amount.

Clark looked to the next 15 years in his State of the City Address to the Greater Saskatoon Chamber of Commerce Thursday.

Regina closed its drive-thru only about half an hour after opening; meanwhile, the lineup at Prairieland Park in Saskatoon stretched down the street Wednesday morning.

The lead plaintiff says he lost nearly $12K to fees out of the roughly $20K he had contributed to two group RESP pl… twitter.com/i/web/status/1…

“This is a very historic moment today,” National Chief Perry Bellegarde of the Assembly of First Nations said. trib.al/zWEGs22