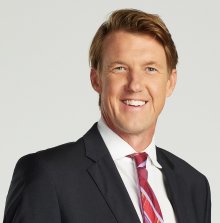 Growing up on the West Island of Montreal, Anthony Farnell developed a love for weather early on. At elementary school he remembers spending most of his time looking out the window at developing cumulus clouds. In 1998, his love for weather grew further as he lived through the “Ice Storm of the Century” in Montreal. Anthony brings his weather knowledge and experience to Global News where he recently celebrated his 15th year.

Highlights of Farnell’s career include covering the record-breaking winter of 2014 and the 2013 Christmas ice storm in Ontario that left thousands of GTA residents without power for weeks. As Global National’s top weather expert, he reported live from Barrie, Ontario, just hours after the powerful EF2 tornado touched down. He has also covered many hurricane’s including the devastating effects of hurricane Sandy in 2012, Irma in 2017 and Dorian in 2019.

After graduating with a BSc. in Meteorology from Vermont’s Lyndon State College in 2003, Farnell began his on-air career at KPAX in Missoula, Montana as a morning meteorologist. He returned to Montreal in 2005 where he worked briefly at Bellator Energy, trading weather derivatives. That same year, Anthony joined Global Montreal’s evening newscast but quickly moved to Global Toronto to become their Chief Meteorologist in 2006. Since then, Anthony has expanded his reach and now brings his weather forecasting skills and personality to all four Global News markets in Eastern Canada, from Halifax to the GTA. He can also be heard giving his seasonal forecasts across the Corus Radio Network.

Anthony Farnell has been a long time supporter of the Michael Garron Hospital, formerly TEGH. He helps out several local charities, including Muscular Dystrophy Canada, H2O4All, HOPE and the Safehaven Project for Community Living. Anthony has also been an ambassador for Engage and Change for more than a decade. Their Project Water and Project Winter Survival campaigns help bring needed supplies to vulnerable homeless on the streets of Toronto. He also makes time to visit schools and local libraries where he and his sidekick, Storm the Weather Dog, teach kids all about meteorology. Besides being a great friend of Farnell’s, Storm is famous in his own right; he’s been featured on numerous national newscasts like CNN & Good Morning America and even made the late-night rounds on Jimmy Kimmel and Conan.

Off-air, Farnell loves to hike, bike and ski and often visits his parent’s cottage in the Northeast Kingdom of Vermont. His other hobbies include beach volleyball, swimming and paddle boarding, but his number one hobby will always be the weather.