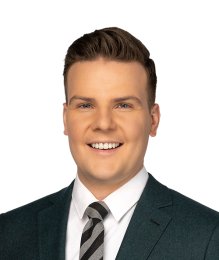 Weather Specialist Phil Darlington can be seen every night on Global News at 11 on Global Edmonton.

At 6’5″ tall, Phil may also deliver the tallest forecast around.

Phil got into television after high school when he decided a career as a marine biologist just wasn’t for him. He is a graduate of the Broadcast Journalism program at Seneca College and holds an Honours B.A. in Communications from York University.

While in school he also was honing his craft in the newsrooms of 680 News, Rogers and the university’s publication… oh, and he was also working as a lifeguard.

After completing post-secondary, he was scooped up by TBT News in Thunder Bay, Ont. and shortly after beginning as a videojournalist, he auditioned for weather and held both positions simultaneously for over two years.

He then moved to Regina where he spent two and a half years as CTV’s morning show weather specialist. He came to Global Edmonton in the summer of 2018.

When he isn’t working, Phil is probably in the great outdoors either on a trail or on the water. That, or he’s pursuing his nerdy streak as a member of the Badlands Garrison of the 501st Legion.