Here’s what we know about the 3 dead in northern B.C. and the suspects

EDITOR’S NOTE: Police have launched a nationwide manhunt after naming Kam McLeod and Bryer Schmegelsky, originally declared as missing persons, as suspects in the deaths of three people found on northern B.C. highways. The story below has been updated to reflect this new information.

A nationwide manhunt is underway for two young men named by police as suspects in a double murder and a third suspicious death on remote northern B.C. highways last week.

RCMP are urging the public not to approach if they spot Kam McLeod or Bryer Schmegelsky, who police say should be considered dangerous, and instead should immediately call 911 to report any sightings. The pair are suspected in the shooting deaths of Australian Lucas Fowler, 23, and American Chynna Deese, 24.

Fowler and Deese were found dead near their blue Chevy van on July 15 on the side of a highway in the northern part of the province, and identified on July 19.

A third dead body was also found about 470 kilometres away at a bridge crossing near Dease Lake, B.C.

That body, identified by police on Wednesday as 64-year-old Leonard Dyck, was found two kilometres south of a burned-out grey and red Dodge pickup truck belonging to McLeod, 19, and Schmegelsky, 18, both from the Vancouver Island community of Port Alberni.

We are asking the public that if you spot Kam McLeod or Bryer Schmegelsky to consider them as dangerous – take no actions – do not approach – and call 911 immediately. pic.twitter.com/RdhBNVr5im

Police originally said there was no evidence to suggest the cases were linked and rejected social media rumours of a serial killer on the loose.

They now have confirmed they believe the cases are linked and that McLeod and Schmegelsky are wanted as suspects in both the double murder and the death of the third man, which police have deemed “suspicious.”

But unanswered questions continue to swirl about the remote nature of the cases and the circumstances that may be involved.

Here are the facts we do know.

Who are the individuals involved?

The families of Fowler and Deese, the murdered Australian and American tourists, say they were on a road trip through Canada before they were shot and killed.

Fowler was the son of a member of the New South Wales Police Force in Australia and had been working in B.C. at the time of his death.

Deese, originally from North Carolina, had been visiting him.

Police have deemed their deaths suspicious.

In the case of McLeod and Schmegelsky, RCMP originally said the two young men had been travelling through B.C. on their way to Whitehorse in the Yukon where they planned to look for work.

RCMP have confirmed they are investigating photos online of the two men wearing army attire and holding Nazi paraphernalia.

A manhunt is currently underway in northern Manitoba near the community of Gillam, located on the Nelson River.

RCMP say the men are considered to be “armed and extremely dangerous.”

“If you see these individuals, do NOT take action and do NOT approach,” the warning reads. “Call 911 immediately.”

Officers believe the men are continuing to travel and were last seen driving a grey Toyota RAV 4.

Both McLeod and Schmegelsky may have altered their appearance since they were seen on Sunday, the force noted.

According to Alan Schmegelsky, the father of Bryer Schmegelsky, his son is in “serious pain” after a troubled childhood following his parents’ divorce in 2005, and said he expects the nationwide manhunt will end with his death.

He also said his son spent most of his time on YouTube and playing video games after the divorce.

“He’s on a suicide mission. He wants his pain to end,” he said. “Basically, he’s going to be dead today or tomorrow. I know that. Rest in peace, Bryer. I love you. I’m so sorry all this had to happen.”

Kam McLeod is described as:

Bryer Schmegelsky is described as:

In an emailed statement sent to Global News Tuesday afternoon, McLeod’s father, Keith McLeod described his son as a “kind, considerate, caring young man” who “always has been concerned about other people’s feelings.”

“As we are trapped in our homes due to media people, we try to wrap our heads around what is happening and hope that Kam will come home to us safely so we can all get to the bottom of this story,” McLeod wrote in the statement.

WATCH: RCMP warn public that suspects in BC double-murder are potentially dangerous

Police did not identify the third body, belonging to Dyck, for several days and have refused to offer an specifics about the circumstances of his death.

In an effort to identify the Vancouver man, police had released a composite sketch but warned they were wary of making any remarks that could change a person’s memory or recollection of relevant events given there were still people they wanted to speak with who may have “key evidence.”

Dyck was a botanist who lectured at the University of British Columbia, with a staff profile on the school’s website describing him as a sessional lecturer in botany who had been scheduled to hold a seminar on Sept. 12.

Mishty Banerjee, who did graduate studies with Dyck in the 1980s, described him as having a “tremendous sense of humour.”

It’s not known how Dyck came into contact with McLeod and Schmegelsky.

RCMP say they received “a number of tips” regarding a person of interest in the case — Derek Whisenand, a Texas man who crossed the border into Canada sometime around June 24.

According to Manitoba RCMP, Whisenand is wanted for murder in Texas, may have a gun and is considered dangerous.

On Tuesday, B.C. RCMP Sgt. Janelle Shoihet said police “have received a number of tips in relation to Whisenand.

“I have passed that information onto investigators but do not have a sense of whether or not they are looking in relation to the tragedies in northern B.C.,” she said.

WANTED for Murder (Texas): 27yo Derek WHISENAND illegally crossed into Canada around June 24. May have a gun & is considered DANGEROUS. Travelling with a lrg mixed breed dog with a brindle coat. DO NOT APPROACH – If seen, call 911. #rcmpmb. For more info: https://t.co/GE7Mf6jCFq pic.twitter.com/Jc7qSKqmmW

Whisenand was identified on social media by users wondering whether he could be involved in the case after police released a composite sketch of a man they said witnesses had described as being seen talking to Fowler the night before his disappearance.

Officers say the man is not a suspect but is a person with whom investigators would like to speak.

WATCH: RCMP discuss release of new images in search for BC murder suspects

The force on Monday released a composite sketch of the man and asked him or anyone with information to contact police.

He has been described by police as a Caucasian man with darker skin, who was shorter than Fowler, standing at six feet three inches tall.

Officers say he may have a beard or glasses.

He was seen driving an older model Jeep Cherokee, with a black stripe on the hood and a black light or bull bar.

Police say they do not know what the two men were speaking about.

It is believed he was travelling southbound.

Police also released video footage of Fowler and Deese at a Fort Nelson gas station on July 13, which shows the couple arriving in Fowler’s van around 7:30 p.m.

What are the points of interest?

Northern B.C. is a remote area of the country with limited cell service in some parts and police spread across a large region of territory.

Both the bodies of Fowler and Deese and the pickup truck of the two young men were found along two separate stretches of highway with few interconnecting points between them.

Both Highway 37 and Highway 97, part of the Alaska Highway, dissect from a common starting point between Upper Liard and Watson Lake, very small communities just north of the Yukon border with populations numbering in the hundreds.

Forestry and mining account for much of the business there.

Both towns are part of the territory of the Liard First Nation.

Highway 97 and Highway 37 are the only two routes for travellers looking to get to Alaska or the Yukon from B.C. 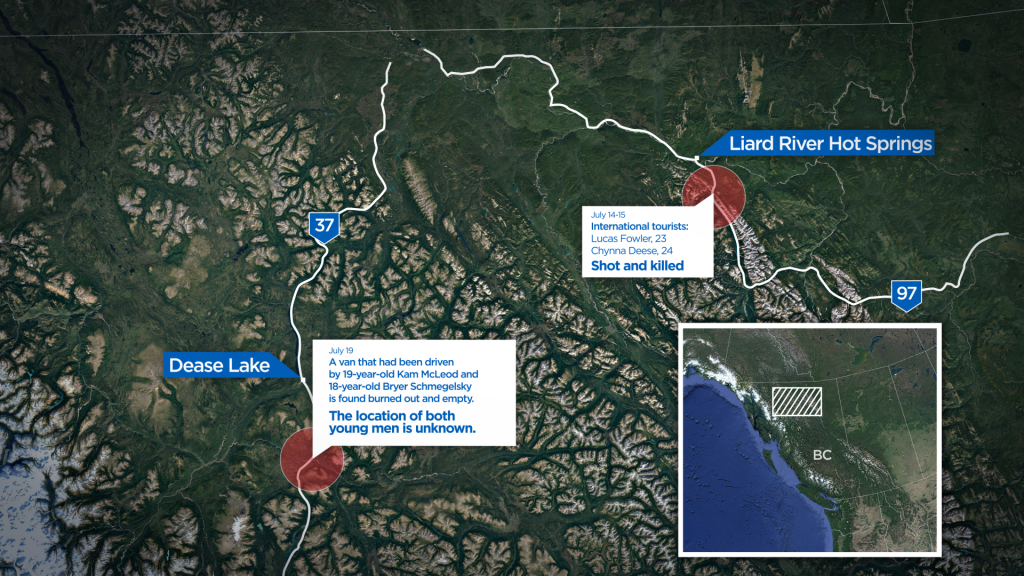 Neither are part of the Highway of Tears — the infamous stretch of Highway 16/Yellowhead Highway running east-west from Prince Rupert on the coast to Prince George in the middle of the province — that has been the site of many high-profile murders and disappearances for decades.

Fowler and Deese were found dead about 20 kilometres south of Liard Hot Springs on Highway 97.

McLeod and Schmegelsky’s truck was found south of the Stikine River Bridge, about 50 kilometres south of Dease Lake on Highway 37.

The unknown body was found two kilometres away from the van near a pull-off from the highway.

What do we know about the circumstances?

Many of the questions outstanding about both cases focus on the specifics of what may have taken place.

Police say both McLeod and Schmegelsky had been regularly contacting their families up until shortly before the discovery of their burned-out truck.

The vehicle found burned out was a red and grey Dodge pickup with a camper attached to the back.

Its B.C. licence plate was LW6433 and was last seen travelling south from the Super A general store in Dease Lake on Thursday at roughly 3:15 p.m.

It is not clear at this point whether Fowler and Deese were targeted or attacked at random, or whether they were killed inside or outside of their vehicle.

Their 1986 blue Chevy van was found with a smashed rear window, according to the tow truck driver who brought it to an RCMP lot on Sunday.

Police have launched a manhunt in northern Manitoba for McLeod and Schmegelsky, who are believed to be near the small community of Gillam.

A Canada-wide warrant is out for their arrest, and both have been charged with second-degree murder.

An enhanced police presence is out in the region of Gillam, as well as nearby Fox Lake Cree Nation, as the hunt for the men continues.

Patrols are out in force and police have also set up check-stops on roadways in the area.

RCMP in Saskatchewan, Manitoba and Ontario have also issued public notices warning individuals not to approach the pair.

They are believed to be dangerous.

Anyone with any information about McLeod and Schmegelsky should call Dease Lake RCMP at 250-771-4111, Crimestoppers at 1-800-222-8477 or leave a tip online at www.crimestoppers.net.