Here’s what some international media have wrong about northern B.C. double murder

There remain more questions than answers at this point in a tragic double murder of a tourist couple in northern B.C. last week with much of the concern centring around the challenges posed by the remote locations in their cases and the danger two suspects may pose to the public.

RCMP on Tuesday announced that Kam McLeod and Bryer Schmegelsky, young men from Vancouver Island whose burned-out pickup truck was discovered near a dead body just days after the double murder of Australian Lucas Fowler, 23, and his American girlfriend Chynna Deese, are now suspects in the couple’s deaths.

The young men are also wanted in connection with the death of the unidentified man whose body was found two kilometres south of their burning truck and are considered “dangerous” by the RCMP.

READ MORE: Here’s what we know about the 3 dead in northern B.C. and the suspects

Both were originally declared missing after the discovery of their burning truck on Friday but police say they were last seen driving a different vehicle in northern Saskatchewan, and that anyone who spots them should not approach but rather call 911 immediately.

But the remoteness of the locations involved appears to be prompting confusion among international media covering it.

Several British, Australian and American media outlets have wrongly identified the location of the double murder as well as the discovery of the burning truck and third dead body as taking place on or near the notorious Highway of Tears, linked to so many deaths and disappearances over recent decades.

In reality, the murders of Fowler and Deese and the discovery of the burned-out vehicle and dead body happened on two separate highways — and neither of them is part of the infamous Highway of Tears.

Here are the facts.

What is the Highway of Tears?

The Highway of Tears refers to a portion of B.C.’s Highway 16, which runs east-west from Prince Rupert to Prince George.

It’s a section of roadway frequented by those leaving small, impoverished communities in search of jobs or a new life elsewhere.

But it is also remote, with many resorting to hitchhiking as a way to traverse portions of the 720-kilometre stretch.

Dozens of Indigenous women have disappeared or been murdered along the roadway since the 1970s, and police have searched over the years for suspected serial killers, single killers or other offenders related to the disappearances.

One serial killer, Cody Legebokoff, was convicted of killing four women along the stretch in 2014.

READ MORE: A list of the victims along B.C.’s Highway of Tears

A U.S. sex offender, Bobby Jack Fowler, died in prison in 2006 but had been described by police as a “strong suspect” in several other murders along the route.

Other individuals have also been investigated over the years, but police said in 2016 they do not believe they will ever catch all those involved in the decades-long spate of murders and disappearances, noting they likely involved a number of different perpetrators.

Through the RCMP investigation into the disappearances, investigators also probed some cases along portions of Highway 97, but the route itself is not actually considered part of what is known as the Highway of Tears.

How far is it from where these new cases happened?

Police currently have an investigation open into the double murder of Fowler and Deese.

They had also opened a separate missing persons case in the matter of McLeod and Schmegelsky, whose grey-and-red Dodge pickup truck was discovered burned out on a remote stretch of road, but RCMP confirmed in a press conference on Tuesday those men are now suspects in the double murder.

A dead body that police say was neither of the Port Alberni men was found about two kilometres away from the vehicle.

The Dodge pickup truck was found on Highway 37 south of the Stikine River Bridge, roughly 50 kilometres south of the small community of Dease Lake.

From there, it would be about a seven-hour drive south along Highway 37 for 485 kilometres to reach the point where it intersects with the northern tip of the Highway of Tears in Kitwanga, B.C.

In the case of Fowler and Deese, their blue 1986 Chevy van was found on the side of the Alaska Highway about 20 kilometres south of Liard Hot Springs.

The Alaska Highway is a stretch running from northern B.C. into the Yukon and on to Alaska. It includes several component highways, but in B.C., it is Highway 97 that makes up the provincial portion of that route.

Both Highway 37 and Highway 97 begin in the communities of Upper Liard and Watson Lake just across the Yukon border. 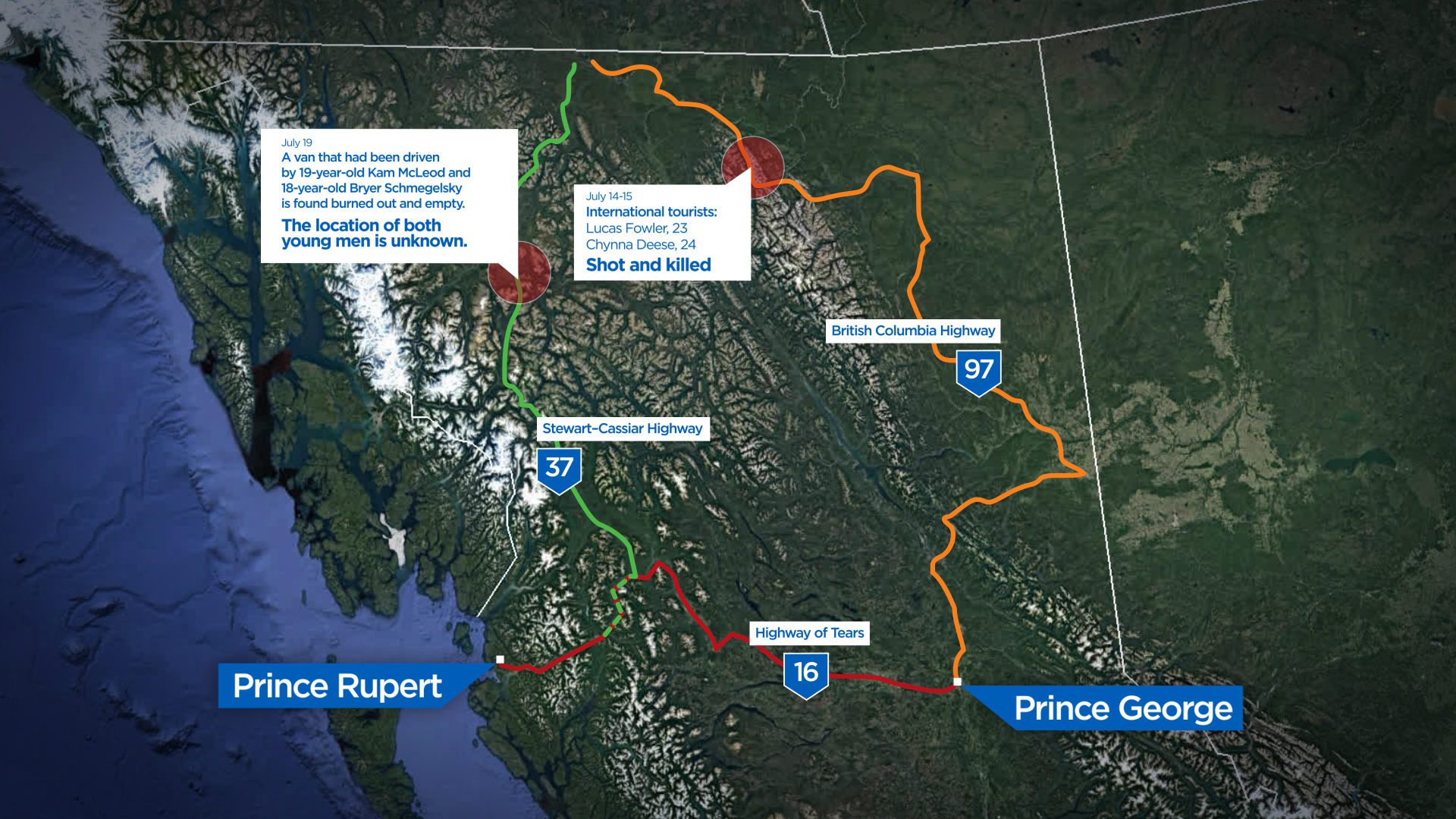 In the case of Highway 97, it then curls south through northern B.C. and the B.C. Interior towards Kamloops, intersecting with the Highway of Tears briefly as it nears its endpoint. But the location of the double murder, south of Liard Hot Springs, is a 13-hour drive north from that intersection point.

That translates to 1,115 kilometres between the spot where the couple’s bodies and van were found to the nearest intersection with the Highway of Tears.

So, again, although both Highway 37 and Highway 97 have points of intersection with the Highway of Tears, it is not correct to refer to them as part of the notorious route itself, given the term encompasses the specific stretch between Prince Rupert and Prince George.

Who got it right and who got it wrong?

The U.K.’s Metro and Mirror newspapers wrongly reported the murders took place along the Highway of Tears.

In Australia, News Corp’s news.com.au also wrongly called the two investigations the “‘Highway of Tears’ case” in its report. That report falsely stated the murders of Fowler and Deese took place on the same highway where McLeod and Schmegelsky’s truck was located and where a third dead body was found nearby.

The Australian Associated Press, a private wire service in the country, also correctly distinguished that the double murder, the discovery of the burning truck and the third dead body were all discovered at different locations a considerable distance apart.

In the United States, CBS News reported that the murder of Fowler and Deese took place “near” the Highway of Tears and did not inform readers of the significant distance between that roadway and the sites of the double murder on another stretch of highway.