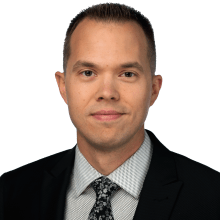 Now in his second tour with Global Lethbridge, Tom rejoined the team in June, 2017 after a three year stint in radio.

He’d spent the previous four years at Global as a Producer, Anchor and Videographer.

A Calgary transplant, Tom is now rooted in Lethbridge and proud to call the city home.

In his spare time Tom can be found either skiing or golfing (depending on the season), and spending quality time with his wife Susan and dog Molly.

Tom graduated with honours from SAIT’s Radio, Television and Broadcast News Program in 2009.