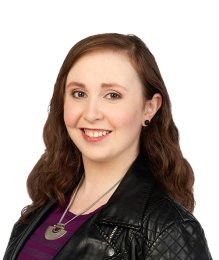 Edmonton-born Morgan Smith has been lucky enough to work in her hometown for her entire media career, most of that time with 630 CHED and iNews880.

Fresh out of university, Morgan started as a weekend writer for iNews880 shortly after its launch in 2008.

Since that time, Morgan made the leap to on-air news reader for both stations and occasionally guest-hosted on 630 CHED’s Lesley Primeau show.

When she’s not waking up early for the morning news, Morgan is active in Edmonton’s poetry and theatre scenes. She’s also moonlit as a burlesque performer with Send in the Girls Burlesque and as an actor in the annual Halloween horror show Dead Centre of Town at Fort Edmonton Park.

You can occasionally catch her performing at the Edmonton Fringe Festival, as numerous voices in BioWare games like Mass Effect: Andromeda, and in April 2017 as the emcee for the Mayor’s Celebration for the Arts.