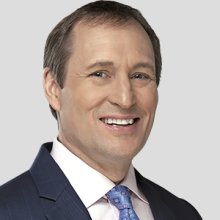 Mark Madryga is Global BC’s Chief Meteorologist, keeping BC viewers informed on the latest weather forecasts and events, Monday to Friday. You can catch him on Global News Morning and Global News at Noon, along with regular updates on BC1.

Madryga’s obsession with weather started as a nine-year-old, growing up in Kamloops. He passionately recorded detailed weather reports on notepads and cassette tapes before and after school and never missed a Norm Grohmann weather report on BCTV.

Madryga attended NorKam Secondary in Kamloops, followed by two years at Cariboo College and then to the University of BC where he graduated with his Bachelor of Science in Physical Geography and Meteorology in 1986. He was then hired by Environment Canada where he spent eight months at the training branch in Toronto, followed by a posting to the Pacific Weather Center in Vancouver, where he was an Operational Meteorologist for 21 years. That meant frequent around-the-clock shifts, producing a wide variety of forecasts for many clients in many fields, such as aviation, marine, forestry and highways.

His passion for forecasting and presenting weather later branched into television on Global BC (known as BCTV) in May 1994 on the Noon News, when a position for a Meteorologist became available. He then moved to the weekend weather post in the fall of 1997. In September 2006, Mark joined the weekday Morning News team where he continues to relay the first forecasts of the day to viewers.

Mark is also a regular contributor to a large number of charity events throughout the year, including emcee duties for numerous fund-raising galas, luncheons and weekend walks.

Birthday or Anniversary Announcements on Global News at Noon

To request a birthday or anniversary announcement on Global News at Noon, please call 604-420-2288. Please note: We limit our announcements to 100+ birthdays and 70+ anniversaries because we get so many requests. Thank you for your understanding. Also, we are not required to make these announcements, but we do our very best to accommodate everyone.

Please email your photos to weatherwindow@globaltv.com.