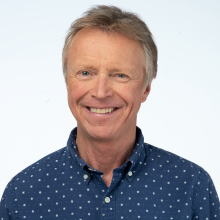 Gil Tucker is a born and raised West Coaster, attending Vancouver Community College and BCIT before getting into broadcasting. He worked at stations in Prince George, Kelowna and Red Deer, then came to Global Calgary.

He worked as a general reporter and occasional anchor, before settling into his current role as the lucky guy who gets to regularly do “people stories.” He considers it a privilege to be able to meet so many interesting and inspiring individuals each day. None of the stories would happen without the great people who share their experiences with us.

Some the particularly memorable ones who stand out: all the players who put in all the hours at the rink in Chestermere in 2012 and 2014 to set new records for the world’s longest hockey game, raising $1 million for the Children’s Hospital. A 9-year-old girl who sold her paintings of hearts to raise $11, 000 to help the homeless. And the always enthusiastic and entertaining Herb Williams, the creator and host of the Superdogs shows.

Gil will never forget his pummelling at the hands of an 82-year-old Stu Hart, the wrestling legend responding to his scrawny opponent’s whimpering with “Oh, you sound like a goosey girl.” Replying to the pleading “I give” with “You can’t give.”

What a great lesson: “You can’t give.” No matter what you’re up against, you just have to keep going.