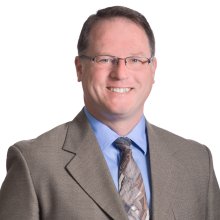 Andrew began his career as a sportscaster at the legendary CFBC radio in the Port City in the late 1980s before moving on to the news side at K-100 radio in the early 1990s.

He took a brief hiatus from the industry in 2003 and was a stay-at-home dad to his two young sons.

By 2005 the radio bug had bitten again and he moved on to News 88.9 in Saint John, where he spent nine years as the Morning News Anchor and Editor.

Andrew has also sat behind the microphone in many a hockey arena, serving as public address announcer for the AHL’s Saint John Flames and for a few years with the Saint John Sea Dogs.

In his spare time, Andrew enjoys spending time with his wife Melanie and sons Sam and Will.

He is very excited to bring to Global his knowledge of Saint John, with its variety and its always interesting mix of stories.

Andrew hopes all who tuned in to him behind the mic will continue to do so as he moves to his exciting new role in front of the camera.