A social media post by the suspect in the Toronto van attack praised Elliot Rodger, another mass killer who (among other things) also drove his car into pedestrians four years ago.

Police arrested suspect 25-year-old Alek Minassian nearby the white, rental van that was used to plow into pedestrians in north Toronto on Monday afternoon, killing 10 people and injuring 14 others. He was charged with 10 counts of first-degree murder and 13 counts of attempted murder.

READ MORE: What we learned from Alek Minassian’s incel-linked Facebook page — and what we’d like to know

While police haven’t offered a motive for the vehicle rampage, they did confirm that most of the injured were female.

“The Incel Rebellion has ready begun!… All hail the Supreme Gentleman Elliot Rodger!” the post read. 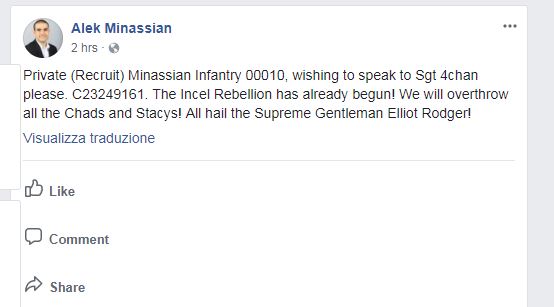 Rodger’s actions, which police called a “premeditated, murderous rampage,” are praised online by self-titled “incels.” Incel, a short form for “involuntarily celibate,” is an online sub-culture mostly populated by men who don’t have sex, but believe they are owed sex from women.

“Almost all agree that the world (women) owes them sex and that they are oppressed for being sexless men,” wrote U.S. academic Ross Haenfler. “Ideally, incels would be able to have access to women’s bodies whenever without any backlash — or input from women.”

So what did Elliot Rodger do?

After first killing his two roommates, he posted a video manifesto titled “Retribution” online, and sent a written version to family and friends via email.

He then drove to a sorority house and after being denied entry, shot three people on the sidewalk. He drove away and continued shooting and driving his car into passersby. He also engaged in a police shootout, before driving away and shooting himself.

One of Rodger’s victims was identified as 19-year-old George Chen, who was originally from Ottawa and studying computer science nearby.

In the rambling writings, Rodger detailed his plan to kill his roommates and then invade the sorority, which he concluded symbolized the world that tortured him – beautiful women who would have spurned him in favour of the “obnoxious slobs” whom he also despised.

“I’ll take great pleasure in slaughtering all of you,” he said. “I don’t know why you girls are so repulsed by me.”

His actions have been labelled a hate crime by some.