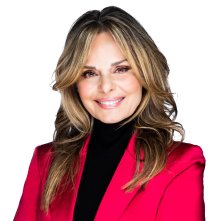 Broadcast Journalist Susan Hay has been part of the Global News family for more than 30 years. Her current position is anchor/producer of Making a Difference, the popular evening news segment profiling inspirational people and organizations throughout the GTA who are positively impacting others.

Hay began her career at MCTV in Sudbury as a weather anchor and host/producer and moved to CBC Toronto as weather anchor and on-location entertainment reporter. In May 1989, Hay joined Global Television where she anchored daily regional and national forecasts.

Hay continues to dedicate her free time to working with many charitable organizations and is spokesperson for The Leukemia & Lymphoma Society of Canada, The Darling Home for Kids and World Vision Canada.

In 2003, she visited Africa with World Vision to help children orphaned by AIDS and more recently travelled to El Salvador for charitable purposes. Her work in Africa resulted in a one-hour show that earned a Telly, an American Industry Award for Excellence in TV and Commercial Broadcasting.

On April 25th 2022 Hay was appointment to  Order of Ontario, the province’s highest civilian honour, given to an Ontarian who has shown the highest level of excellence and achievement in any field, and whose impact has left a lasting legacy in the province, in our country and abroad.  Hay continues to serve her community not only in her compassionate reporting but also inspiring and impacting others through her exceptional public service, which has left a lasting legacy.

Hay has won numerous accolades including the Gemini Humanitarian Award for her remarkable contributions and commitments to community and public service outside the Canadian television industry, the Rotary Youth Impact Lifetime Achievement Award in recognition of her contributions to youth and young adults, and the Distinguished Diamond Award for her role in assisting charitable causes for the betterment of the community.

Aside from her busy home life, Hay enjoys running and has completed three marathons including the Ottawa Citizen National Capital Marathon, the Barbados Marathon and the Hawaii Marathon, all in aid of Leukemia and Lymphoma research.