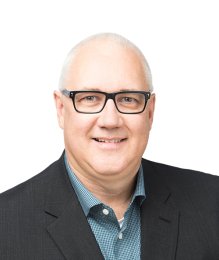 Morley Scott has been broadcasting in Edmonton for over 30 years, doing what many people do from the couch after work: talking about sports.

It all began many years ago at the University of Alberta radio station (he calls himself a stow-away, not a student) broadcasting Golden Bears hockey, basketball and football. Since 2010, Morley has been the play-by-play voice of the Edmonton Elks on 630 CHED and also provides updates from the sports desk during 630 CHED Mornings with Daryl McIntyre.

In between has been a road map that took him through St. Paul Alta., Prince Albert, Sask., Edmonton, Vancouver and then back to Edmonton.

The highlights are: 16 years working on Oilers broadcasts mostly on radio, but some on TV, one year with the Vancouver Giants of the WHL and several world-class events, like the Stanley Cup final, the Grey Cup, the Brier, the World Track and Field Championships and spending a weekend broadcasting a demolition derby.

Morley is usually found at a stadium, rink, studio or walking with a phone in one hand, a coffee in the other, and Billy Joel music in his ears.