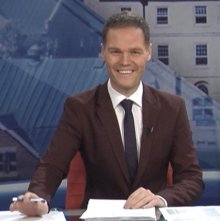 Kraig Krause joined the Global News team in 2018 as a videographer and anchor.

Through his career, Kraig has covered stories from the west coast, northern British Columbia, the prairies, and Ontario.

After graduating from both the communications program at York University and the broadcast journalism program at Seneca College, Kraig joined Corus Radio in Vancouver as a traffic reporter on AM730 and CKNW. He later made the transition to television and moved to Dawson Creek in northern British Columbia to become the 6 pm news anchor on CJDC TV, before moving east to report for CTV Winnipeg.

While in Winnipeg, Kraig covered a variety of stories, including crime, homelessness, immigration & the 2018 Winnipeg Jets Stanley Cup playoff run.

Since joining Global News, his highlights include being the first reporter to sit down with the ‘sexsomnia’ case victim after she requested to lift her publication ban. Kraig also worked closely on the eastern Ontario Children’s Aid Society series investigating alleged child sexual assaults within foster homes.

Kraig was born and raised in British Columbia’s Fraser Valley.

02:36
Canada
Life in Kingston, Ont., after one year of pandemic

01:41
Canada
Video surfaces of what appears to be a car jacking in Kingston, Ont.

02:00
city of kingston
Ride-sharing services may soon be regulated in Kingston, Ont.

01:44
The Morning Show on CKWS
Kingston, Ont., family to sleep in igloo to raise money for homeless youth

02:16
Canada
Sloan, Bernier and Hillier among ‘End the Lockdowns Caucus’

02:07
Canada
“He can’t wear a mask’: father of child with autism speaks out about Costco policy

The search for a missing three-year-old has entered its third day.

The health unit says that some people have been trying to get COVID-19 vaccinations with other people’s booking information.

Life in Kingston, Ont., after one year of COVID-19 pandemic

Over the past 12 months, the number has skyrocketed to nearly 800 cases and one death linked to the virus.

Kingston, Ont., police arrest the man connected to a hit-and-run in the city’s north end.

Video surfaces of what appears to be a Kingston, Ont., carjacking

A video recorded in Kingston, Ont., shows a man pulling a driver from a car at a traffic light and then driving away.

Some constituents living in Hillier’s riding of Lanark-Frontenac-Kingston are speaking out against their MPP, asking for him to resign or be removed.

Ridesharing services may soon be regulated in Kingston, Ont.

A City report is asking council to consider regulations be enforced on Kingston-area Uber and Lyft drivers.

Ontarians aged 80 and older will start receiving COVID-19 vaccines in the third week of March, according to the province.

Kingston, Ont., family to sleep in igloo to raise money for homeless youth

After building a 500-block igloo on their front lawn, a Kingston family is preparing to sleep in it to raise money and awareness for the Kingston Youth Shelter.

Politics
February 18, 2021 10:59 am
Belleville workers protest at city hall ahead of union and city meeting with mediator

Union representatives are meant to be meeting with city officials to work out a deal on a new contract Thursday to avoid a possible strike or lockout Monday.

Queen’s University and the University of Waterloo will be following the effects of COVID-19 on students and faculty over the next several months.

A group of Canadian politicians from all levels of government has banded together to fight COVID-19 lockdowns.

The College of Physicians and Surgeons of Ontario say the onus is on the provincial government to adjust legislatio… twitter.com/i/web/status/1…

The poll suggests one in five Canadians are not sure if they will ever feel comfortable living without masks or vac… twitter.com/i/web/status/1…