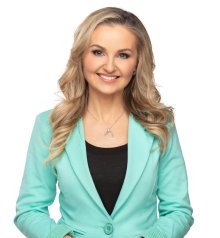 Born in Poland, Klaudia Van Emmerik immigrated to Canada with her parents when she was eight years old. She received a major in German and a minor in French from the University of Victoria.

Klaudia attended the British Columbia Institute of Technology, where she received a diploma in broadcast journalism. Her first break came at Victoria’s AM 900 Radio in 1998. Not long after, she made the leap into television, and headed north to work at NTV in Dawson Creek.

From there, it was back to her hometown of Victoria, where she spent three years reporting and anchoring at CHUM Television.

Klaudia then spent a year at CFJC Television in Kamloops, reporting and anchoring the 11 p.m. news. She was thrilled to relocate to Okanagan in 2005 to join the award-winning CHBC Television team.

A huge animal lover, Klaudia is a volunteer at the SPCA, a role that is very important to her.

The British Columbia SPCA honoured her in 2012 for media excellence, and Shaw presented her with a humanitarian award in 2014.

Klaudia is married.  She and her husband Matt  have a son named Finley, who was born in 2015.

Her hobbies include volunteering, running, hiking, skiing, boating, and spending time with family.