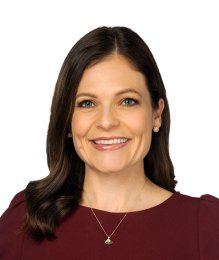 Kim Smith is the weekend anchor for Global News Hour at 6 and Global News at 11, and reports three days a week.

She joined the Global News Edmonton team in summer 2017 as a digital journalist, filing stories for broadcast and online. In 2018-2019, she filled in as host and co-producer of Family Matters, a segment that runs on TV and radio stations across the country.

She also spent time working at Global Calgary, CTV Edmonton, Global Regina and Newcap News in Lloydminster. Prior to TV, she worked as a reporter and anchor at 630 CHED and iNews880 in Edmonton.

One of her career highlights was reporting on a natural gas explosion at Regina Beach, where her live report was part of a national RTDNA award for best newscast.

She was also part of breaking news coverage of the Edmonton U-Haul attack, which was part of a RTDNA award. Kim is also proud of a three-part feature she produced on drug funding for rare diseases.

Kim grew up in Beaumont, Alberta and studied political science and Spanish at the University of Alberta. After graduating with a Bachelor of Arts, she spent time teaching English in Taiwan before moving to Australia to complete her master’s degree in journalism, focusing on issues affecting Aboriginal groups.

In July 2019, Kim and her husband proudly welcomed their second son.