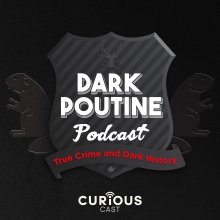 Dark Poutine Podcast – True Crime and Dark History is an unabashedly Canadian weekly podcast that covers true crime, dark history and other creepy topics from the perspective of two real live Canadians. Dark Poutine was born on Halloween 2017, and is now approaching a million downloads.

Mike Browne is the creator and researcher; he is joined by co-host and longtime friend Scott Hemenway. Together they record the weekly show in Mike’s homemade studio in Surrey, British Columbia.

Mike, born in Halifax, Nova Scotia, has a background in film, advertising and social media. He dives deep into each week’s topic, and his care for humanity, personal experience with trauma and love of storytelling shines through.

Mike says, “We knew we had a pretty decent idea going into this. But without the support we’ve gotten from the rest of the true crime podcasting community, we’d be nowhere near as successful as we have been. We owe a lot to those other podcasts that have gone before us and supported our efforts right out of the gate. We want to pay that forward, by helping other up-and-comers any way we reasonably can.”

Mike has always had an interest in true crime and in radio. Upon hearing shows like “Serial” and “Sword and Scale,” he began to think about starting his own show; he was also inspired by Canadian offerings like “The Nighttime Podcast,” also a Curiouscast show, and “True Crime.”

Scott is an accomplished photographer and he brings compassion and humour, where appropriate, to the podcast.

In a way, Mike tells Scott the stories, and Scott is the voice of the audience. His interjections at just the right moments help listeners absorb more difficult parts of the sometimes brutal stories.