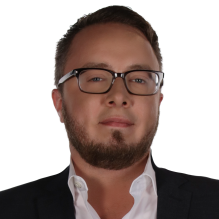 Chris has been immersed in entertainment journalism for more than 10 years, covering TV, movies, celebrity and pop culture. Formerly the Entertainment editor at HuffPost Canada, Chris has interviewed hundreds (if not thousands) of celebrities, ranging from D-list to A-list. Among his favourites are Quentin Tarantino, George Takei, Betty White, Margaret Cho and Keanu Reeves, though Chris enjoys interviewing just about anybody.

Prior to his time on red carpets Chris wrote about a variety of topics, from medicine and health to lifestyle and fashion, for multiple websites. He’s an unabashed TV addict (many shows he watches he won’t admit to here), loves movies, and shamefully reads tabloid magazines in the grocery store checkout. He was recently one of the featured cast members in Behind the Red Carpet, a 2014 documentary about the real goings-on at the Toronto Film Festival.

When he’s off-duty, Chris loves the beach and the sun as well as his #1 destination: Las Vegas.

02:28
World
Harry reunited with Meghan and Archie on Vancouver Island

01:54
Canada
Top Chef Canada judges on what to expect on All Stars season

03:03
Entertainment
‘Vikings’ star Alexander Ludwig on how his character’s confidence changed him as a person

00:46
Entertainment
Michael J. Fox says he should’ve been ‘pretty much disabled by now’

01:23
America Votes 2016
Celebrities react to the news of a Donald Trump presidency

01:30
Entertainment
What to watch on Netflix this November

00:51
World
Steven Avery of ‘Making a Murderer’ engaged to woman he’s met once

The children’s book, titled ‘The Bench,’ will have an author byline that reads ‘Meghan, the Duchess of Sussex.’

‘Star Wars: The Bad Batch’ follows the elite and experimental clones in the aftermath of the Clone War, as the Bad Batch finds their way in a rapidly changing galaxy.

His TLC reality show, ’19 Kids and Counting,’ was cancelled in 2015 after Josh Duggar was accused of molesting underage girls, including at least two of his sisters.

The couple released two new portraits in celebration of their marriage at Westminster Abbey on April 29, 2011.

Toronto filmmaker Ann Shin’s latest documentary, premiering at Hot Docs, explores the possibility of living forever and encapsulating our memories for those we love.

Going into the ceremony, David Fincher’s ‘Mank’ led the nominations with 10, and for the first time, two women — Chloé Zhao and Emerald Fennell — were nominated for best director.

One contestant won big on the daytime ‘Price Is Right,’ and then another won the same prize in the primetime episode on the same day.

Actor Benedict Cumberbatch has played Julian Assange and Alan Turing, and now he’s taking on another real-life role in ‘The Courier.’

Entertainment
April 14, 2021 9:55 am
Ed the Sock (a.k.a. Steven Kerzner) wants to bring MuchMusic back with NewMusicNation

Steven Kerzner, who’s been seeking in one way or another over the last several years to revisit those glory days of MuchMusic, is getting into action.

Entertainment
April 13, 2021 8:35 am
‘Simpsons’ actor apologizes to ‘every Indian person’ for voicing Apu

Hank Azaria had voiced Kwik-E-Mart owner Apu Nahasapeemapetilon since the character first appeared on ‘The Simpsons’ in 1990.

While it would be incorrect to describe ‘Nomadland’ as a happy movie, it does possess a strange joy.

One episode of ‘SpongeBob SquarePants’ was removed “due to sensitivities surrounding the global, real-world pandemic,” said a Nickelodeon representative.

We see much of the same storyline in ‘Nobody’ as we did in ‘John Wick,’ except we’ve moved to suburbia and removed any of the black-trenchcoat badassery.

Jessica Walter’s daughter confirmed the news in a statement.

In the letter, the Canadian Paediatric Society also calls on the provincial government to "mobilize plans to safely… twitter.com/i/web/status/1…

“Does it make sense in 2021 that you buy a disposable product without thinking, ‘how am I going to dispose of it on… twitter.com/i/web/status/1…

One reason for the higher online response involves a pandemic-related change the agency made this year to allow any… twitter.com/i/web/status/1…