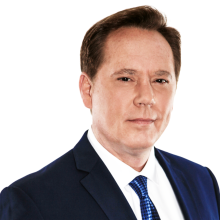 Bill Hutchins is a veteran News Anchor at CKWS-TV in Kingston, Ont. He has anchored the station’s flagship news program, CKWS News @ 6, since 1997.

Born in Toronto, Bill attended the Radio and Television Arts program at Toronto Metropolitan University and got his first taste of electronic journalism as the part-time News Director at the campus radio station in 1983 while still a student.

His professional career started in 1984 as a newscaster and reporter at Toronto radio stations CKEY, CFRB and CKFM and also as a writer for Broadcast News before moving to Kingston with his family in 1990 when he joined CKWS TV as a reporter. Bill has two children and enjoys movies, travel and freelance writing. To contact Bill, just send him an email.