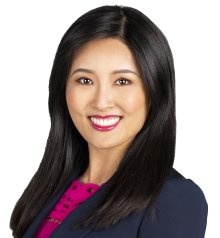 Born in China, Adriana Zhang (pronounced: Jung) was raised in Winnipeg before completing her Honours Bachelor of Science at the University of Toronto. At a young age, she had always dreamed of becoming a doctor but soon realized medicine wasn’t for her. After dabbling in a few media writing courses, she enrolled in the Journalism program at Humber College.

It was at Humber where she discovered a passion for reporting and soon after graduating, she landed her first on-air job. With no hesitations, Adriana packed her things and headed north to Thunder Bay where she wore many different hats – reporting, presenting weather, and anchoring for TBT News.

Now at Global Winnipeg, Adriana is excited to be back in her hometown as the Morning Weather Anchor — waking up every day with the city she holds dear to her heart.

Early mornings aren’t new to Adriana though. In her youth, she was a three-time provincial ice-dance champion with a grueling morning training schedule. And in 2003, Adriana and her ice-dance partner represented Manitoba at the Canada Winter Games.

Outside of work, Adriana loves to travel and try new foods. She often plans her vacations around which restaurants she’s dying to try.