By Sarah Kraus Global News
Police are urging residents to take a look at newly released surveillance video from the night of a costly fire at an Old Strathcona apartment building.

On Jan. 6, investigators say a suspicious fire started around 2:15 a.m. in the Whyte Champagne apartment building located at 106 Street and 83 Avenue.
READ MORE: Overnight arson in Old Strathcona apartment building displaces 13 residents, causes $675K in damage
On Tuesday, police released surveillance video of a white Pontiac Grand Am in a nearby alley. The footage shows the vehicle approach a parking lot, stop, back up, turn around, then back into a spot perpendicular to the other vehicles.
Someone then gets out of the passenger side of the car carrying something and walks out of sight.
The video then flashes forward and shows someone running down the alley back toward the Grand Am. They get into the passenger side and the vehicle leaves.
Story continues below advertisement
Residents described waking up to smoke detectors going off and choking on smoke as they fled their homes, banging on neighbouring doors as they passed.
“I told them, ‘Grab the babies and go!’ Whether it be your baby-baby or your kitty cat baby or your doggy baby — just grab and go! Never mind about your stuff,” resident Kelly Daniels said.
About two dozen firefighters were able to safely remove all 13 residents, as well as their pets, from the burning building. However, a significant amount of damage was done to the building, to the tune of $675,000: $325,000 to the contents and $350,000 to the structure.
Story continues below advertisement
READ MORE: Fire ravages south Edmonton apartment building for 2nd time in a decadeThe fire was discovered in the hallway of the lower level of the four-storey walk-up, and Edmonton Fire Rescue Services said it extended to the second floor, causing damage to several floor joists and electrical wiring.Floors two, three and four suffered varying degrees of smoke damage to both the structure and contents, but water damage was limited to the lower level.Edmonton Fire Rescue said the blaze was deliberately set. 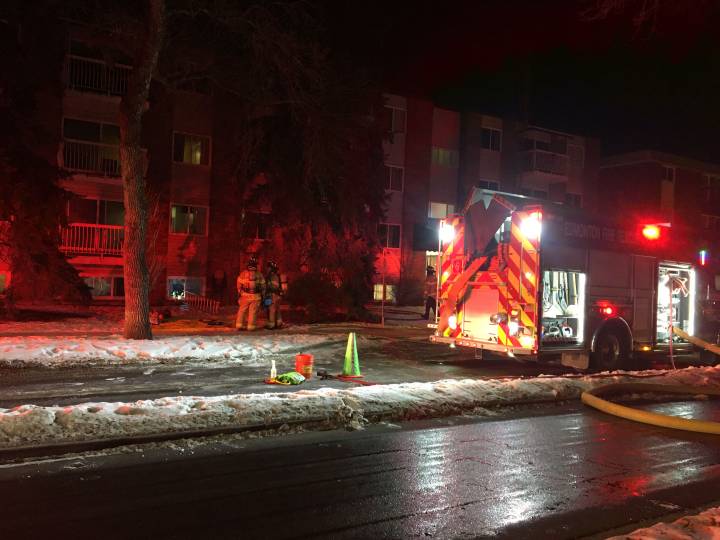 READ MORE: Fire in south Edmonton apartment parkade being investigated as arson, $1.5M in damage
Police want to speak to the person caught on surveillance camera regarding the fire investigation.
Anyone with information is asked to call the EPS at 780-423-4567 or #377 from a mobile phone. Anonymous information can also be submitted to Crime Stoppers at 1-800-222-8477 or online.
With files from Karen Bartko, Global News.
© 2020 Global News, a division of Corus Entertainment Inc.