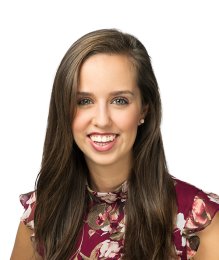 Since graduating from St. Francis Xavier High School, she has travelled Canada extensively and lived in five different provinces.

First, she moved to Halifax to attend the University of King’s College and earn a double major in Journalism and Environmental Sustainability.

She got her start in the industry as an intern at Global Edmonton back in 2012 and worked her way up the ladder behind the scenes, before deciding she wanted to get out in the community and share people’s stories.

Sarah left to pursue reporting and ended up moving north to CJDC in Dawson Creek, BC, where she juggled reporting, anchoring sports, and providing weather forecasts.

Then, it was back to Alberta, this time a little further south, as a reporter at CHAT News in Medicine Hat. Her last stop was in Saskatchewan where she reported at Global Regina and filled in on the sports desk.

Since coming home to Edmonton in 2015, Sarah has covered stories that tug at the heart-strings, like when viewers helped complete the bucket list of a young girl with an inoperable brain tumour.

She also spent a week in La Loche covering the mass shooting in 2016 and later that year worked long hours helping inform residents about the Fort McMurray wildfire.

When she’s not interviewing news-makers, Ryan can be found walking her rescue dog Ruth at the city’s off-leash parks, working out at the gym, or sneaking out of the city to go camping, hiking or skiing.

Sarah was married and changed her name in August 2019.