A New Brunswick man allegedly involved in a series of incidents including an altercation with police before he was shot at by Mounties in Moncton over the weekend is now facing 16 charges.

Joshua Thomas Rossiter, 27, of Lutes Mountain, was charged with prohibited driving after appearing before a judge by phone link Saturday. But new charges were laid Tuesday when he made his first appearance in Moncton provincial court.

Rossiter is accused of assaulting a police officer with a vehicle, robbing someone with a knife or imitation knife, and mischief by damaging police vehicles.

Other charges include failing to stop while being pursued by police, obstructing a police officer, dangerous operation of a vehicle, attempted robbery, theft of gas from Irving on Mountain Road, four counts of driving while suspended, and four counts of prohibited driving.

“Codiac RCMP had responded to two reports of robberies of individuals who had gone to withdraw money from ATMs at separate banks,” Cpl. Jullie Rogers-Marsh, a spokesperson for New Brunswick RCMP, tells Global News. 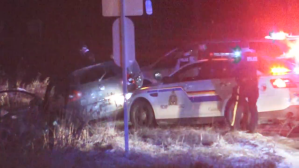 RCMP officers arrested the suspect near the Horsman Drive and Berry Mills Road intersection before taking him to hospital Saturday morning.

Rogers-Marsh confirmed they were called to the parking lot of Miss Cue, a pool & billard hall and bar on Mountain Road at about 3:30 a.m. that same morning.

“The call was for an individual who appeared to be asleep in a vehicle in the parking lot and the vehicle matched the description of the one involved in the earlier incidents,” she says.

READ MORE: Woodstock RCMP are looking for help regarding a shooting

RCMP say they tried to arrest the driver, but he resisted and drove into several vehicles in the parking lot including RCMP cruisers and also in the direction of police officers.

According to police, an officer shot at the suspect vehicle before it fled.

After following the vehicle, it eventually went off the road at the intersection of Horsman Road and Berry Mills Road, according to police.

They say the suspect was taken to hospital to be treated for a minor gunshot injury before being released into police custody, but no one else was seriously injured.

An independent watchdog will review the incident as per standard practice when someone is injured in an altercation with police.

Rossiter is due back in court January 7 after waiving his bail hearing until then.