How to wake up early without hating your alarm clock

It’s Monday morning and your alarm clock is shrieking at you. The numbers read 7 a.m., but that’s impossible — you’re foggy-headed, but you swear it should only be 5 a.m.

Eventually, you either hit the snooze button, bury your head under your pillow, and hurl your alarm across the room, or begrudgingly, roll out of bed to begin a day that’s starting way too early.

This scenario plays out for many people when they start their work week because they’ve ruined their sleep schedule with a weekend of sleeping in and staying up late, according to Richard Horner, a professor of physiology at the University of Toronto.

“People are operating on a different time zone (Monday mornings),” Horner, who is also the Canada Research Chair in sleep and respiratory neurobiology, told Global News.

“The jolting out of sleep would likely indicate that someone’s not getting the sleep they need.”

But Horner says your alarm clock doesn’t have to be your enemy. There are a few time-tested strategies you can use to minimize your morning misery, while ensuring that you wake up refreshed and ready to tackle the day.

These strategies can help you avoid a wide range of health risks associated with chronically poor sleep, such as heart disease, diabetes, neurological disorders and respiratory illnesses. They can also help you ease out of sleep into a wakeful state, without relying on a rude alarm to jolt you out of a deep slumber.

“If you still need that horrific sound to wake someone up … something’s not right,” Horner said.

Here’s how you can set yourself up for a gentler wake-up every morning and, perhaps, throw away your alarm clock for good.

What to replace your squawking alarm with

Horner says the science around alarm clocks is still murky, so he doesn’t recommend any one way to wake yourself up.

He says the best approach is to try to slowly ease yourself out of sleep and into wakefulness, rather than shocking your system. Startling yourself awake causes a surge in heart rate and blood pressure, which can have negative consequences over the long term, especially for people who have heart issues.

“Start slowly and gently,” he said.

If you hate the sound of a noise alarm or worry about waking your sleeping partner, there are other ways to reliably wake up without all that noise.

WATCH BELOW: What is sleep apnea?

Many retailers now sell vibrating alarm clocks that use movement, rather than sound, to wake you up. You can stash one of these under your pillow, or buy a vibrating bracelet to wake yourself up without alerting the person beside you. Some smartwatches come equipped with this feature.

A handful of companies have also launched alarm clocks that simulate a sunrise, so that the light gradually gets brighter in your room until you wake up.

Horner recommends any combination of light, music or vibration to wake yourself up. The light should gradually grow brighter, and the music should gradually increase in volume. He says there aren’t enough clinical trials to support any one type of alarm clock, so each person should simply experiment and see what works best for them.

Dr. Susheel Patil, of Johns Hopkins University, insists that the best way to wake up is to a sunrise, although a daylight-simulating alarm clock can be the next-best thing.

“Having a light that goes off in the room … might be helpful in terms of waking someone up and starting to train a person’s circadian rhythm,” said Patil, the clinical director of sleep medicine at Johns Hopkins.

The most effective strategy for waking up each day is to align your natural alarm clock with your digital one, both Horner and Patil say.

Your body has its own daylight-tracking system that helps you wake up each day, according to the current scientific understanding of sleep. Three American researchers were awarded the Nobel Prize in medicine in 2017 for revealing how this system, called a circadian rhythm, works, and how it influences the daily activities of life on Earth.

They showed that every living creature has a circadian rhythm that governs its energy levels based on the anticipated cycles of day and night. This circadian rhythm regulates hormones, blood pressure, body temperature and metabolism over a roughly 24-hour cycle, so the body knows when to wake up, eat and sleep each day. 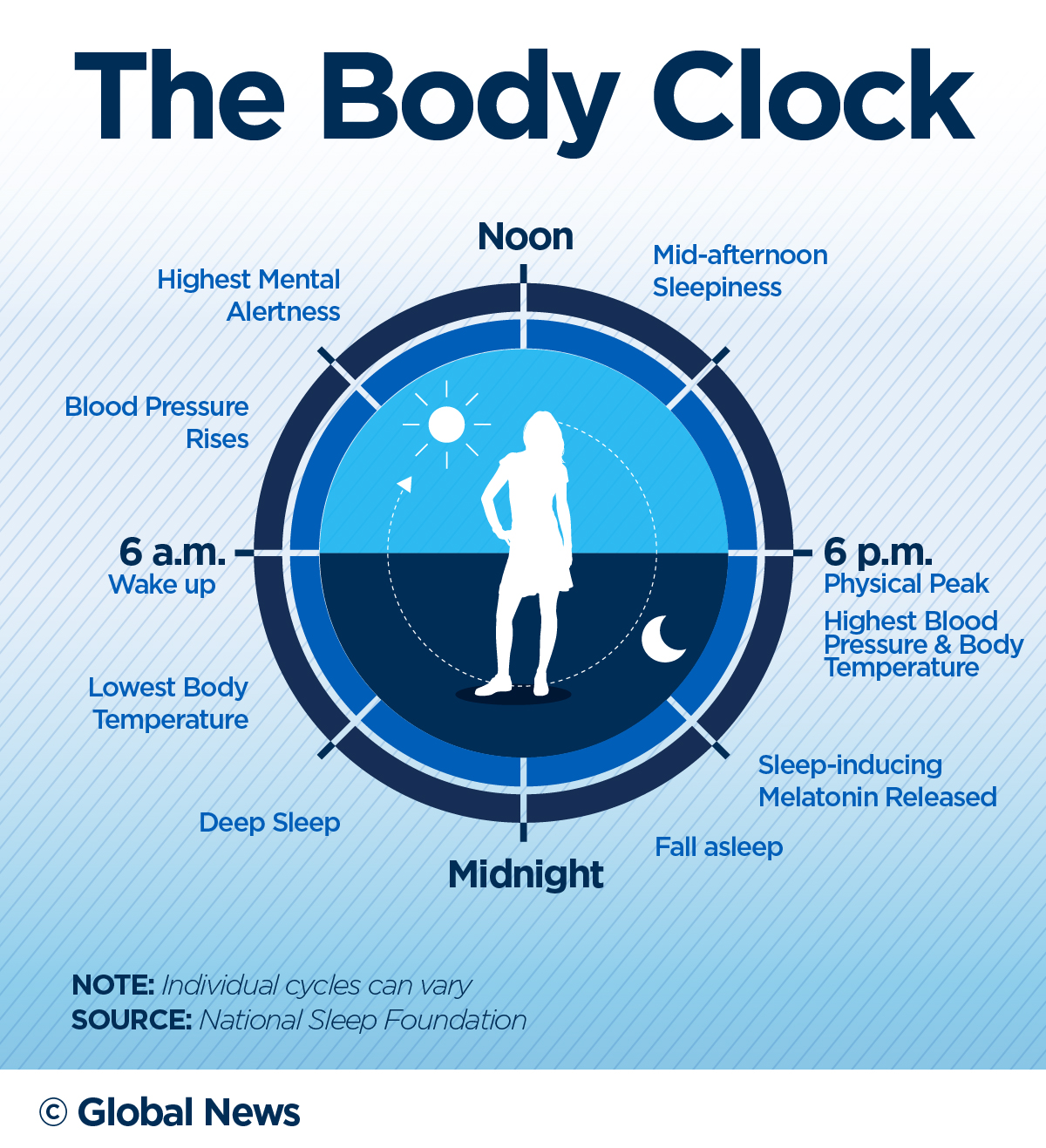 “Every living thing has the machinery in all of its cells, including our human brains, to recognize the rising and the setting of the sun,” said Horner. He says our bodies take cues from the light around us to figure out when it’s day or night, and that influences when we want to sleep or wake up.

READ MORE: Why a regular bedtime is good for your health

“Exposure to natural light is a really powerful organizer of our behaviour … and it’s something that we don’t get enough of,” Horner said. He says bright lights in the morning can “reset” your personal circadian rhythm so you can be certain it’s on the right schedule. That’s why it’s important to throw open your curtains and soak up some sunlight each morning, if possible.

“It’s really about harnessing and understanding our body clocks to fit with the schedules we have,” he said.

WATCH BELOW: Do weighted blankets help you sleep?

This can be particularly helpful for “night owls” who prefer to stay up late, but need to wake up early for work or school.

“Exposing one’s self to bright light early in the morning helps bring that body clock backwards in time, so people get tired earlier in the evening,” he said.

The other solution? Both Horner and Patil say the best way to wake up is to simply make sure you’ve had a calm, restorative six to eight hours of sleep — and that starts with keeping your circadian rhythm ticking on a regular schedule over your weekends.

It’s not worth it to sleep in

Patil says it’s a bad idea to short-change yourself on sleep during the week, then attempt to “catch up” over the weekend. He says consistency is more important for your body because it helps you regulate your metabolism.

“It’s important that if you want to be at your peak performance, you get adequate sleep on a regular basis,” he said. “Particularly in times of stress, it’s really important to try to stick to a sleep schedule because the brain craves consistency.”

READ MORE: Report – Rotating shifts could put you at a higher risk for obesity

Patil says the most restorative period of sleep is the deep slumber that occurs in the latter part of the night, and that’s not an easy stage to return to. You definitely won’t be able to slip back into that stage during a 10-minute snooze, for instance.

WATCH BELOW: How to adjust your kids’ schedules to Daylight Saving Time

1:47 How to adjust your kids’ schedule to Daylight Saving Time
Story continues below advertisement

He says that overwhelming desire to hit the snooze is driven by a process called sleep inertia. It’s a response in the brain that helps us fall back asleep after we’re briefly woken up during the night. However, it can also kick in when we wake up in the morning, particularly when we haven’t had enough sleep.

“We all have a 10- to 15-minute window where it takes us a little while to clear our head and get going,” Patil said.

Sleep inertia is normal, and it should pass after a short time, Patil says. However, it might be particularly intense for people who wake from a deep sleep. These people might feel hungover or “sleep drunk,” indicating they haven’t had enough rest, Patil says.

Horner says this effect is more common on Monday mornings because people’s circadian rhythms have often shifted and they’re being awakened from their deep-sleep phase. “It feels like waking up out of a deep coma,” he said.

Horner says sleeping in on the weekend only messes up your circadian rhythm before you head back to work. “It can gain an hour or two over the weekend, and that’s why on Monday morning, we might be setting the alarm for 7 a.m., but as far as the body is concerned, it’s 5 a.m.,” he said.

In other words, the best way to wake up early on Mondays is to do it on Sundays, too.