Justin Trudeau received a present from voters just in time for the holidays; his Liberals still hold a seven point lead over the Conservatives despite a string of negative headlines, according to a new Ipsos poll.

The poll, conducted exclusively for Global News between Dec. 10-14, found 38 per cent of Canadians surveyed would vote for the Liberals if an election were held tomorrow, compared with 31 per cent who would support the Conservatives under Andrew Scheer.

Twenty per cent would support the NDP and party leader Jagmeet Singh, with seven per cent supporting other parties, including the Green Party, and five per cent support for the Bloc Quebecois, the poll found.

The results are nearly identical to a previous Ipsos poll conducted in November and very similar to the 2015 federal election, where the Liberals won a majority with 39.5 per cent of the vote, while the Conservatives took 32 per cent of the vote and the NDP finished with roughly 20 per cent of votes.

So with the Liberals facing a series of ongoing ethics related controversies – including several involving Finance Minister Bill Morneau and Trudeau’s Bahamas vacation– why has support for the federal Liberals remain unchanged?

“The numbers for all three parties are pretty similar to what they were in the last election,” Darrell Bricker, CEO of Ipsos Affairs, told Global News. “This government is a product of Justin Trudeau’s personality and people’s affection for him. You see that when it’s compared to his two opponents who barely register.”

How Canadians will react after Trudeau apologized for violating provisions of the Conflict of Interest Act when he vacationed on a private island owned by the Aga Khan last Christmas remains unclear. The poll was conducted just a week before the ruling from the ethics commissioner announced Dec. 20.

“When you actually look at his party, policy performance, and policy ideas, they are definitely not as buoyant as his own personal numbers are,” Bricker said. “Which is why this Aga Khan thing is such a huge problem [for the Liberals]. Any dent in Trudeau’s [image] whatsoever is a massive problem for the government.”

“Everything is riding on Trudeau,” he said.

Story continues below advertisement
Bricker said a decline in support for a government tends to come from an accumulation of controversies or scandals and not one specific incident.
“If the position of [the Liberals] leader is under attack that is the most important thing right now to their overall support,” he said.

Fewer Canadians believe the government is working well in Ottawa – just 50 per cent down from 60 per cent this time last year – and only 46 per cent of respondents say the Trudeau government has a clear plan for the country, according to the poll.

And 54 per cent of Canadians now say the Trudeau government has fallen short of their expectations, according to the survey. The Ipsos poll also found that less than half of people surveyed – 49 per cent – had faith in the federal government’s ability to manage the economy. 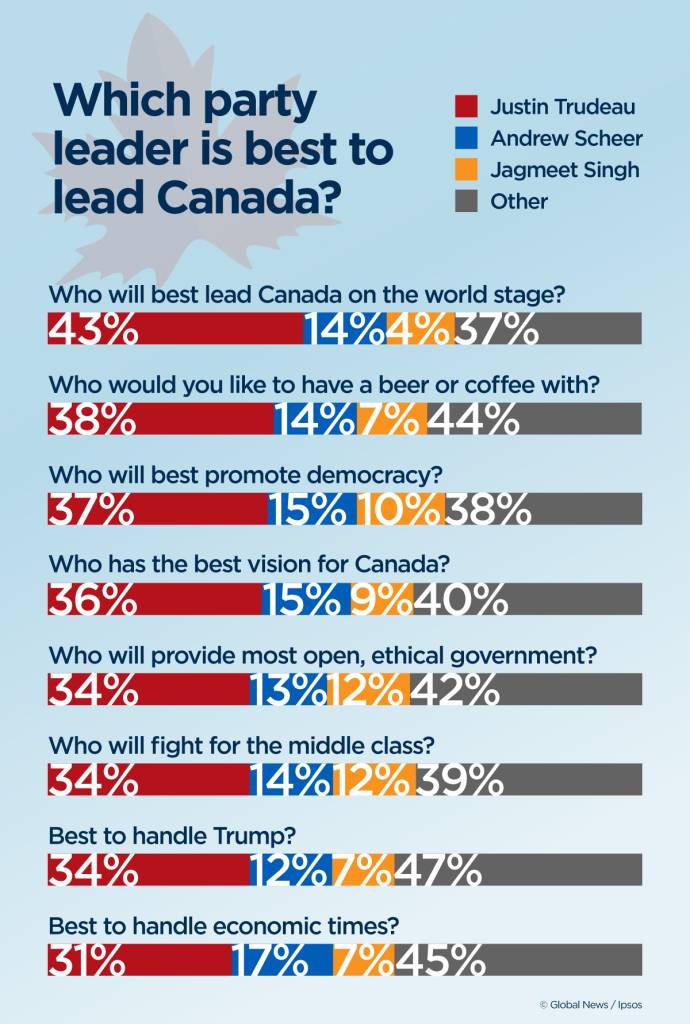 These are some of the findings of an Ipsos poll conducted between December 10 and 14, 2017, on behalf of Global News. For this survey, a sample of 2,098 Canadian aged 18+ from Ipsos’ online panel was interviewed online. Weighting was then employed to balance demographics to ensure that the sample’s composition reflects that of the adult population according to Census data and to provide results intended to approximate the sample universe. The precision of Ipsos online polls is measured using a credibility interval. In this case, the poll is accurate to within ±2.4 percentage points, 19 times out of 20, had all Canadian adults been polled. The credibility interval will be wider among subsets of the population.