The rising cost of food isn’t new, but a report released Friday by Statistics Canada confirms fresh vegetables like broccoli and cauliflower have seen their largest year-to-year increase since 2009.

In fact, produce costs have jumped more than 18 per cent in the past year, something that’s having a direct impact in the Halifax region.

“Eighteen per cent is a shocking figure. It makes you think you’re living up north and not here in Halifax,” said Michelle Porter, executive director of Souls Harbour Rescue Mission.

Every day, Souls Harbour provides 100 meals to people facing hunger and homelessness in the Halifax area. Due to the rising cost of food, preparing those meals has become a bit of a challenge.

“I believe that the vegetable crisis, we’ll call it, is a problem for people living in poverty,” said Porter.

“When you’re trying to feed your family something besides the cheap potato chips and Kraft Dinner, and yet it costs so much more and it shouldn’t, It becomes a real problem for our guests.”

Recently, Souls Harbour had to stop making salads altogether because the cost of lettuce was simply too high.

“Some of the tricks Chef Les has been able to incorporate for Souls Harbour is to use a lot of those local root vegetable produce, to rely on canned vegetables,” said Porter. “And to use frozen vegetables, because they’re usually the freshest and retain their nutrients.” 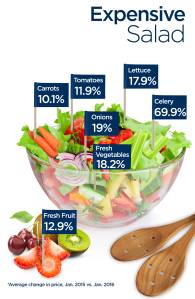 Souls Harbour Rescue Mission isn’t the only local organization being affected by the high cost of food.

“We will supplement the donations that come to us,” said Kevin MacKay, operations manager for Parker Street.

“We get normal people or companies that are donating to us on a regular basis and we just find that the excess that they have isn’t meeting our needs, so we have to go and purchase.”

On top of receiving fewer donations, the food bank is seeing more users.

Since Jan. 1, Parker Street has signed up more than 200 new clients, many of them are recent Syrian refugees who have moved to the city.

MacKay says the recent increase in clients, combined with the high cost of food is having a direct impact on their operations.

“It’s fairly significant the impact that the Syrian Refugee Crisis, the other refugees that come through us and just with the average person who finds that they’re just not able to make their paycheck go all the way.”

Food banks are encouraging anyone who can help, to donate.

Meanwhile, the price of food is expected to rise for the foreseeable future.