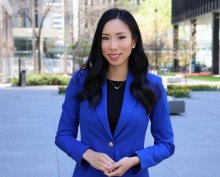 Tracy Tong is a multi-market anchor and producer for Global News, anchoring the 11 p.m. daily newscasts in Toronto, Montreal, Halifax and New Brunswick.

Tong is a well-known and trusted journalist in the Greater Toronto Area, and has spent the last decade as a reporter and anchor with CTV News Toronto, CP24, CityNews Toronto, CTV News Kitchener, CTV News Northern Ontario and Rogers TV.

Tong has reported on some of the biggest breaking and developing news in the region. She has broken numerous exclusive stories and extensively covered high-profile crime cases, including the Bruce McArthur serial killings, the Yonge Street van attack, and the Danforth shooting. She also travelled to follow the Toronto Raptors throughout their 2019 NBA championship run and has been a key part of live coverage teams during major political events.

Tong is a RTDNA winner, three-time RTDNA nominee, and Canadian Screen Award nominee for breaking stories including the Algonquin Park student drowning and suicides within the Ontario Provincial Police.

After graduating from Ryerson University with a Bachelor of Journalism degree, Tong began her career in the Global Toronto newsroom as an editorial assistant.

She is also a classically-trained pianist, winning multiple national and international competitions in her early years, before teaching students of her own.

Tong was born and raised in Toronto, and speaks English and Cantonese.

“We really have to keep talking. At the end of the day, I’m also a human – so I go home to family and friends. And when I put on this uniform, I have a responsibility. I think really explaining to the public, why we do what we do, is a first step.” Continue reading →

Were you one of the thousands of Albertans who “enthusiastically booked their campsites on opening day” of reservat… twitter.com/i/web/status/1…

RT @GlobalCalgary: Were you one of the thousands of Albertans who “enthusiastically booked their campsites on opening day” of reservations…