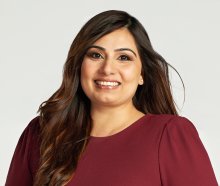 Sharmeen Somani is a reporter for Global News Weekend, Global TV’s national weekend morning show. Somani reports on national stories that air across Canada. These stories can be found on Amazon Prime, the Global TV app and on the Global News YouTube channel.

Somani has been with Global News since 2017. She started off at Global Kingston as a local news reporter, where she had the chance to fill in as a weather specialist and co-host on The Morning Show on CKWS. A year and a half later, she joined the national online original content team in Toronto, where she put together original national and international stories for Global’s digital platforms. She landed her role as a digital broadcast journalist for Global News Weekend in July 2020.

Always being versatile, she learned the ins and outs of a newsroom at CTV London. During her time there she edited stories, built and took graphics to air, worked the audio boards and filled in on the writing, assignment and weather anchor desks.

Somani spent some of her most memorable years at Wilfrid Laurier University, where she received her B.A. in communication studies. She did her postgraduate studies in broadcast journalism at Seneca College in Toronto.

In her free time, Somani loves spending time with her family and friends, being outdoors, taking dance and hot yoga classes as well as being an avid traveler.

02:09
Health
Blue Monday: how to ease the blues this winter

01:49
Canada
What is people-first language?

01:45
Tech
How typing has evolved over time

02:10
Canada
What nature and doing charity have to do with each other

02:28
Canada
World Introvert Day: What life is like for introverts

02:06
Canada
2022’s top travel trends: What Canadians want out of their next vacation

02:22
Canada
Why Canadians are having a hard time shopping for holiday gifts

02:20
Canada
How to support those grieving over the holidays

01:25
Canada
How to maintain a good sleep routine during the holidays

01:48
Canada
How to recognize burnout

The rise and fall of WeWork

In a matter of a few months, WeWork, a real estate startup that provides co-working spaces worldwide, went from a valuation of $47 billion to $10 billion. What came in the way of WeWork’s success?

As Canadians think about who they will vote for in the upcoming federal election, there is one generation that has the potential to heavily influence the outcome.

Afshari’s fate currently lies in the hands of the Islamic Revolutionary Court.

What a troop withdrawal would look like if the U.S. and Taliban reach an agreement: expert

Donald Trump says the U.S. and Taliban are getting close to reaching an agreement under which the U.S. and other foreign forces would pull out their troops from Afghanistan.

The country’s reception centres are filling up, leaving an increasing number of asylum seekers on the street, and the issue is only getting worse.

Why Muslims celebrate Eid twice in a year

The Eid that is held in late spring is called “Eid-al-fitr”, the festival celebrated after a month of fasting. While Eid celebrations held towards the end of summer are known as “Eid-al-Adha”, or the festival of sacrifice.

A study out of Northwestern University finds that race may be a reason why some people aren’t getting callbacks during the hiring process.

Bill S-203 and the future of marine parks in Canada

Keeping large aquatic mammals in captivity for entertainment is slowly becoming a thing of the past in Canada after the House of Commons passed Bill S-203, also known as ‘Ending the Captivity of Whales and Dolphins Act,’ last month.

Tourism brings many benefits to a destination — including more money and jobs as well as cultural preservation — but its environmental impact is creating new problems.

Pride month: Honouring the LGBTQ2 community’s progress and recognizing the work still to be done

June is Pride month, a celebration held annually to honour the Stonewall riots that took place in New York City in June 1969.

Why Muslims fast during Ramadan

Abdool Hamid, an imam from the Muslim Association of Canada, says there are many spiritual and physical reasons behind fasting during Ramadan.

About 200 people showed up to the local Easter event, where five hunts took place from morning till noon for children of various age groups, from toddlers to preteens.

The eastbound lanes on the 401 were blocked for several hours this morning near Napanee following two separate transport truck collisions that occurred within metres of each other.

The exposure came on a flight from the town of Kerikeri to the largest city of Auckland. trib.al/IUE9O6q

“This is just a dream come true for me," said Barty. trib.al/CkaUUkg